Check out this black-and-white treasure that I found online about three hours ago.

It’s from the May, 1966 issue of The Inco Triangle, the monthly staff publication, published by the biggest mining company in my hometown of Sudbury. 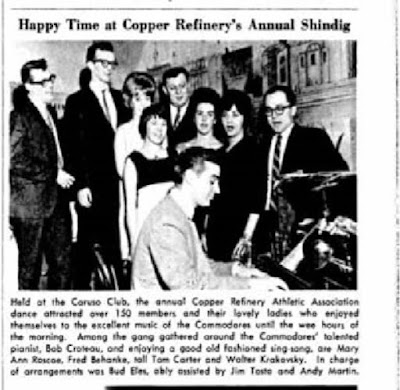 Second from the left is my older brother Tom. All cleaned up in jacket and tie, "Tall Tom" as the writer called him was a member of a hastily assembled choir that gathered around the piano. “Until the wee hours of the morning,” the story tells us.

Sometimes I think I grew up on Walton Mountain.

According to the article, the songfest took place at the Annual Copper Refinery Athletic Association Dance. The copper refinery was one of the big mineral processing plants in town, and Tom worked there awhile.

I don’t know what he did at the refinery but I do recall him having a metal lunch pail (or bucket, as they were called) and every day, when he came home, he handed me--his baby brother--the lunch bucket and there was always some money in it that he let me keep. (Remind me to NOT ask him where that money came from.)

He also brought home a dog once, too, that I think he won in a poker game. Somebody in the family named the dog The Grump; and we had an old doghouse in the backyard that I tried to renovate so The Grump would have a sun porch up top to lie on but he never went up there.

I also think The Grump was the dog that disappeared one day and after we all searched the west end of Sudbury somebody called the Humane Society and found that he had been scooped up so my mom gave us $10 or so to bail out the dog and later we found out that she had secretly called the SPCA and paid to have him picked up in the first place.

What I wanted to write about was Tom’s musical talents, celebrated in this photo. He not only sings.

One of my favourites is a piece he calls, I believe, “The Fishing Song.”

The melody’s quite simple and goes pretty much any way you want it to go, but the lyrics are very specific and they tell a lovely story.

They read as follows:

He also wrote “The Hunting Song.” Same tune as “The Fishing Song” but the words tell a completely different story.

"Peter,", you ask, "what do people make of the songs Tom composes?" Adjectives fail me.

However I’m sure if you go visit Tom in his home in Elliot Lake, Ontario--where he worked in the uranium mine for many years--he’d be glad to sing one of his ditties for you. He’s a man of many talents.

His wife’s name is Judy. She is very patient.

Fishing with Tom II: Miracle of the loafers and fishes

The cops waved us over to the side of the road, walked to the back of our station wagon, opened the tailgate, loaded in I believe two cases of beer, and sent us on our way.


You read that correctly.

The policemen gave us back beer that they had confiscated less than an hour earlier and let us go.

I was 16. I remember because just a few months earlier, I went from being a skinny kid with no life to being useful! I had a driver’s licence. Once I could drive, I could be — although they hadn’t invented the term yet — the
designated driver for my older brother Tom and his buddies.

I’ve always really looked up to Tom, who's about 11 years older than me, and I wanted to hang out with him and his pals Moe, Joe, Brian, Don, Tom, Gerard and the others. They owned cars and played guitars.

They travelled and went hunting and had girlfriends. And they always seemed to be laughing. And singing.

So — and remember this was a long time ago —  with me behind the wheel of whatever car they were using, Tom and his gang could sit in the back and dri… I mean, prepare to fish.

I got to go on all sorts of adventures I wouldn’t have otherwise been part of.

Trips that were fun and educational, too.

There was, for instance, one late May fishing trip to a fishing camp near a little crossroads called Gogama, about 100 clicks north of our hometown of Sudbury.

That trip, I learned how to tie a boat to a car roof rack in such a way that when you cornered just so, the boat would gently slide off the racks and down over the passenger side doors but not so far as to hit the ground. 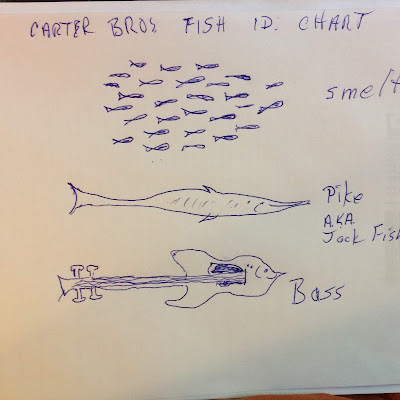 I also learned that sometimes in Gogama, in late May, it snows, and by the time you get to the fishing spot, it’s too cold to do anything but turn around and go home again.

But that wasn’t the night the cops gave us our beer back.

The beer-back night, we were in my father’s 1972 Ford station wagon and headed to the Whitefish River about 50 miles west of Sudbury to do some smelt “fishing.”

The reason for the quotes marks is twofold: First, going after tiny river-swimming creatures called smelt shouldn’t count as fishing because all you do is stand on the shore and dip a long-handled net into the water and pull it out again, full of little fishies. The only skill a person fishing for smelt needs is the ability to not fall into the water.

The other reason for the quote marks?

When we Carters went fishing, it didn’t suck to be a fish.

In other words, somewhere, at this very moment, in a Northern Ontario lake, a couple of 45-year-old pikes are reminiscing about how frightened they and their pike buddies didn’t get when they heard through the fish grapevine that a Carter was going fishing.

But smelts? They had reason to fret.

Smelt fishing in those days, should have been called standing on the shore drinking.  The fun was in hanging around a fire and, as my brother Pat used to say, "trading lies." Dipping the net in the river once in a while was a distraction. Smelt was the only kind of fishing I (or any other Carter) was any good at.  And that’s what we were headed to the Whitefish River to do.

There I was in the driver’s seat while Tom and his pals were aft, drink…I mean warming up.

Just before we got to the river, a cop flags me down. I pull over, roll down my window and he asks where we’re going. I tell him, “smelt fishing.”

“Do you have any beer in the car?” He didn’t have to ask.

We opened the tail gate, the policeman removed two two-fours and told us to have a good time.

We drove five more minutes to the river.  I don’t recall whether anybody took time out from their busy evening to dip a net into the water; we pretty much got to the river and turned around to go home.

I think it was the first time in history that anybody ever got skunked smelt fishing.

A few miles later, the police — God bless them — flagged us down all over again and, believe it or not, gave the boys back their beer.

The fact that nothing bad happened verged on the miraculous.

Fishing with Tom is always one surprise after another. Unless you’re a fish.