Bring out your Ed!

A guy on my street Wednesday asked if I think the universe, or God, or a deceased relative, ever sends messages.
I said "You mean like one of my dead brothers? I have three, you know. Or our sister Mary Leona who died shortly after she was born?  Might she send me the occasional text from the other side?"

It was pretty clear he did not expect that  exact answer. (To tell the truth, I kinda took me by surprise, too.)

But it's true. Pat, Tom and Ed. Dead. And a sister, Mary Leona. My mom had 10 kids and only six of us are still, as one of my co-workers so artfully put it, "on the right side of the sod." The half-dozen live ones are in this great photo, taken in the cemetery where Mary Leona is buried.

And something just occurred to me.

If I sound sort of casual about dead people, it's not a sign of, whatchamacallit, disrespect. I don't like them any less just because they're gone. So why not have fun with them? They'd certainly want us to.
We miss the dead ones, but beyond that?
Here's why this attitude comes so easily to me: I--and the rest of the Carters-- were raised with strong beliefs.

Our mom, Huena, was a fountain of beliefs of all sorts and we (I don't think it was just me) drank them in like baby formula.

In some homes, people grew up knowing which golf club to use  to hit a ball out of a sand trap, or which banks had the best mortgage rates. In my house, we knew that if you wanted to perform well in choir practice you prayed to St. Cecelia. Also, mom knew (don't ask me how) that if you sang your prayers they counted for twice the spoken versions.

If you lost your wallet, check with St. Anthony.

She had religious icons and assorted statues in every room in the house and she also instilled in me and at least two of my siblings and I could name names almost every superstition known to humans. In Huena Carter's house, beliefs were not beliefs, they were facts. Brick solid facts.

Think about what that does to a person.

I once interviewed, for Chatelaine magazine, the super-talented songwriter Rufus Wainright, whose mother was the songwriter Kate McGarrigle and whose father was the songwriter Loudon Wainwright III and HIS father, Loudon Wainwright II, was one of the best-read columnists in the world who wrote about his family for LIFE magazine. (P.S. I think I took Rufus by surprise when--instead of asking about him--I enquired about his granddad who was one of my role models.)

But given his upbringing and genetic inheritance, is it any wonder Rufus can string phrases together?

The Carters had as much supernatural stuff in our house as the Wainwrights had musical stuff in theirs.

It should come as no surprise that one of the first features I wrote for Chatelaine--one of Canada's most respected sources of indepth journalism--was called "A ghost in your bedroom." I just remembered that among the expenses incurred in investigating that story were the ghost-busting services of a Feng Shui expert! The feature also mentioned my sisters' haunted apartment back in Sudbury.

So, the guy asked, do I think the universe, or God, or our deceased relatives sometimes send us messages?

I think one of them sometimes write this blog.

Quote while you're a Ed 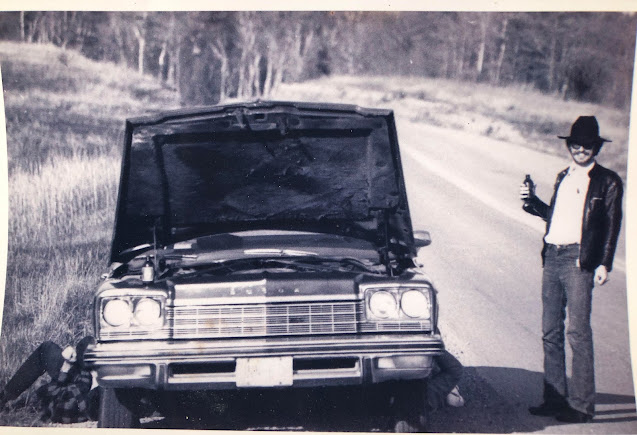 This is my favourite picture of my big brother Ed, who died in February.
It was taken approximately 40 years ago in the southbound lane of highway 6 a few miles north of Manitoulin Island in Northern Ontario.
I shot and processed the photo; a fact I know for sure because I was a reporter at the time and that's what we did.
If you look closely you'll see there are two other guys in the picture, lying under the beautiful albeit broken-down black Buick LeSabre, trying to figure out what was wrong.
One of them was my brother Tom, who died about two years before Ed. The third? Not a Carter but a friend who quite possibly might have known even less than the rest of us what he was looking for.
As if he were beside me on my front porch where I'm sitting now, I can hear Ed: "You see people on the side of the road with their broken down cars with the hoods up, looking to see what's wrong with the motor, but do they ever look to see what the motor looks like when it's running right? Noo.."
I'm pretty sure I was driving the Buick when it cacked out, but I sure know it wasn't Ed. Yes, that's a beer he's holding in his right hand. Eddie left the driving to others. More fun for him.
(Which brings me to another mystery. And here's how Ed might put it. "I totally get why we can't drink and drive; why can't we drink and passenge?")
But back to the present.
I miss Ed all the time and channel him several times a day. What's more--and this sort of borders on the miraculous, two short paragraphs ago, I, without meaning to, sort of made up a quote that Ed might have uttered but didn't actually say. He would have totally approved of "why can't we drink and passenge?"
Which brings us to the upside of missing a dead person..
Ask anyone who knew him. Ed, like everybody who has ever lived, could be--I know you're going to find this hard to believe, and I hope you're sitting down--sometimes a little, um, you know, challenging.
As much fun as Eddie was, his idealistic buddy and fellow CUPW unionist Gerard van Deelen said the following at Ed's funeral, "James was a hardliner. And I like hardliners." (His name is James Edward. He was James at work; Ed at home.)
The wonderful thing about missing Ed and quoting him and thinking about all the stuff we did together is, as the great memories grow, the irritation fades. I think cells have memories and I remember with every cell in my body how much fun we had together but try as I might, I cannot conjure up the same physical reaction I had to his, whatchamacallit, vexiness.
Eddie can still make me laugh but he can no longer make me mad. Same thing with Tom. And now that I mention it, my eldest brother Pat, who died like 30 years ago, too. Happy memories rule.
Grieving my brothers makes my heart grow fonder.
Look at that photo again. How could a guy with a life-affirming grin like that ever vex? And as I remember it, when the cops pulled over and told him to pour out his beer, Eddie was the anti-vex; the paragon of politeness in fact and he did exactly as he was told. Not sure how we got the car back on the road but I guess we must have, some how.
And--as Ed might say--"They all lived happily in the hereafter."
Posted by EditorPete at 2:20 PM 6 comments: