If I were going to phone Netflix and sell them a screenplay based on the the life of my older brother Tom, who passed away two years ago tomorrow, I'd call it "Striped Paint."
Here's why:
When I was a kid, Tom--probably 20 at the time--brought home a second-hand aluminum canoe, and it was a beaut.
The canoe was called a SportsPal and was like no canoe you've seen.
A lot of  stuff  Tom brought home fell into that category. I suddenly remembered a record called "The First Family;"  a whole LP of a guy impersonating characters in JFK's White House. I was around six when that showed up at our house and I'd sure bet it came courtesy of Tom. He also arrived home one night with a dog he won in a poker game. We named it "The Grump."
Back to the boat.
The SportsPal's most distinguishing feature? Bolted along either side were 10-foot long black styrofoam floatation thingies; sort of like noodles. You couldn't swamp this boat if you tried.
The craft measured 12-feet, tip to tip, which is unremarkable until you know that across its middle, the SportsPal was at least a yard wide. You couldn't tip the canoe either.
Flat-bottomed and aluminum, we ran the SportsPal over weeds and sand and rocks sticking out of the river and it emerged undamaged. And the SportsPal weighed about the same as a case of beer.
At some point, somebody decided to take a black magic marker and write, in block letters, on either side of the SportsPal's bow, "Titanic II."
Another feature was Tom's own innovation. I forget how, but  on the back of the SportsPal, Tom mounted a small electric motor powered by an actual car battery that sat on the bottom of the canoe.
I'm having a hard time believing this myself.
The unsinkable untippable unwreckable SportsPal that we had so many good times with was not only perfect for Tom, it was a lot like Tom.
He loved water but never learned to swim. He told me if he was on a boat and it sank, he'd just drop to the bottom and run.
Which brings us to why Tom's biopic should be titled "Striped Paint."
SportsPal canoes came with a distinctive paint job. Tom's was blue-ish, with three-quarter inch long black flecks. Hard to describe. (See what I mean about Tom and the SportsPal sharing traits?)
Tom was generous with his boat too. He let me and my pals fart around with that canoe as much as we wanted. We probably got as much use out of it as he did.
He was like that with everything. Fact: When I was in the early grades of school and Tom worked at a copper refinery, almost every day he'd arrive home after work, hand me his lunch pail, I'd open it and find money he left in there for me. Maybe he loved me so much because we shared a bed for many years and you should love the one you sleep with but that's a different blog altogether. I also trusted Tom and believed him when he told me that the composers Jimmy and Tommy Dorsey were born and raised in Levack, Ont., which is a tiny village north of Sudbury.
After a few years of being paddled, beaten up, thrown around and left out in the bad weather, the old SportsPal started to show its age.  Tom said it was time we touched it up.
I hate to admit how old I was when this occured but Tom handed me a bunch of money--I already knew I was going to get to keep the change--and told me to go to Cochrane's Hardware and ask for striped paint.
I did.
Tom also once told me there was a restaurant in Toronto that was so exclusive that after the server brought you food  but before you took a bite, a person from every country in the world had a tiny taste of the meal to make sure it was prepared correctly.
I've been in Toronto since '85. I'll let you know when I find it.
Posted by EditorPete at 10:16 AM No comments: 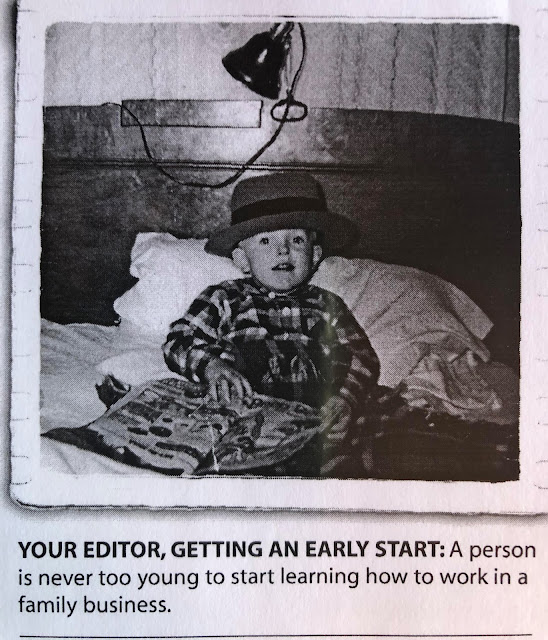 "Sixty-three days ago, I shared with my daughter Ria, 16, an important driving lesson. I taught her which swear words to use when you back up into a police car."

I know because last week, my wife Helena used a three-hole punch and old school binder to assemble and present me with all of the columns I wrote during the 12 and change years I was editor of Today's Trucking magazine, and the constable's car was among them. (Driving lessons learned the hard way. A crash course, but you were already thinking that.)

One of them was called Playing the Fuel Game, a diversion I invented driving Ria, her sister Ewa and Michel to high school en route to my office.

I tuned the radio dial to whatever number I saw on gas station price signs: "It started at a Shell near our home. Gas was $1.07.1 a litre. That's also the number for the classic rock station Q107. A block further, a PetroCan sign said 107.5, which, I discovered, is the freqency for 'Cool FM.'" 106.5 played hip hop. And..."At one point, the posted gas price took my radio dial to a station broadcasting the Roman Catholic Mass."

Another column? Getting a colonoscopy without anesthetic. I mistakenly had the procedure done without any pain relief and it hurt like hell and in my column afterward,  I advised against it.  Truck drivers have to know.

Clearly, leafing through the three-ring binder  I figured they also had to know about:

* The old Night Rider pinball machine I've been carting around with me for 40 years;

*  How we learned to fight the French kids at St. Albert's School in Sudbury;

* Why, if you're getting a tattoo and you're, like, 18, you should anticipate the aging process and maybe have the tattoo designed like a MAD fold-in so what looks like an eagle when you're 18 might resemble a butterfly at 45, when you have extra skin.

*  How many years I shared a bed with my late brother Tom, and how that affected the decisions I make on a day-to-day basis;

* How much time I spent practising "Vegetables on Parade" on my accordion so I could play it at the truck show in Winnipeg.

If Pete's Blog&Grille conducted a 23& Me, it would discover it is a direct descendent of the column. I'm really grateful to Newcom Business Media the publishing company for letting me keep the name even after I left the outfit; a fact that, you'll be glad to know, brings us to the reason I'm writing this.

Yesterday, Jan. 7, 2022, I received a message from my successor at Today's Trucking, John G. Smith. After wishing me a happy new year, John G. handed along the following message. 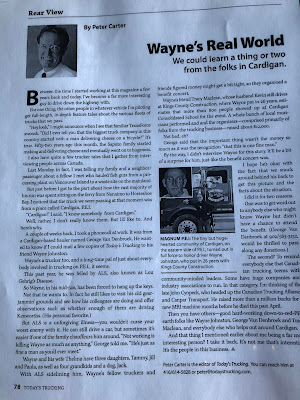 Hello Mr. Carter, I'm sure this may be a tough or impossible request, but I was recently made aware of an article you did focusing on my late Uncle, Wayne Johnston. He was a trucker from Cardigan, P.E.I., and worked for Kings County Construction (which happens to also be my current employer). I was able to turn that into a gift for my father, his youngest sibling, this past Christmas. It was without question the most moved I've ever seen my old man, and many of the rest of the family has reached out to me about being able to have their own copy of it. While I can copy it easily enough, I know everyone loves having an original, so I thought I would reach out to see if backissues/old copies are even a thing that can be tracked down. Worst case scenario, I wanted to let you know how much the article meant to his family and friends. It stirred up a lot of wonderful memories and for that, you have the thanks of so many people. Lastly, I've attached a copy of how it turned out framed, just so you can see the great gift it led to. It only seemed fitting to have it framed in his Kenworth blue. Thank you so much, Tyler Johnston

Nice letter, huh? The column Tyler's referring to is the 18th page of this wonderful collection. It was called titled "Wayne's Real World" but it's also an eye opening peek into Peter's real world. I love this letter and I never use the word love lightly.

Which reminds me. Here's one final indisputable shred of  evidence that planet Peter's a place I wanna stay.

Among the 120-odd columns is a story about how to mismanage business, and it begins "I was in bed with the missus."

I wrote an actual business magazine column with real information in it that began with "I was in bed with the missus."

And years later assembled this mind-blowing collection of magazine columns. For me. Life is one miracle after another.

(One final note: This entire adventure could not have happened without the assistance of  Today's Trucking Art Director Frank Scatozza, who was on staff when I was editor and -- to the  company's credit -- is still in charge of making everything work. If ever anybody wants to meet the emodiment of diligence, creativity and accommodation, ask and I'll introduce you to Frank.)