Q&A with a retired stand-up comic

On Tuesday, June 19, 2018, I spent about 10 minutes on stage in the John Candy Theatre, doing a stand-up comedy sketch. It was the culmination of a six-week course at the 2nd City Comedy School, led by our teacher--a woman named Precious Chong, herself a stand-up and also the proud daughter of Tommy Chong--of Cheech&Chong fame.

What follows is a brief interview with myself about my short but exciting stand-up career.

Q: What was the high point of your life in showbiz?
A: After I left the stage Tuesday, I nipped out to the lounge to grab a beer and I wanted to be in the audience for the rest of the show so I slipped into the theatre and much to my surprise and delight a tall slender woman with long black hair--I'd never laid eyes on her before--came over, threw her arms around me gave me a kiss on the cheek and said "I loved your material. You were great!"

Q: That really happen?
A: Sure did.

Q: Who do you think she was? 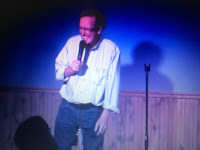 A: No idea. I'd heard comics have groupies, called--and I'm not making this up--"chuckle bunnies," but then I Googled that and it turns out chuckle bunnies are something else altogether. So she could have been, like, an undercover recruiter for the 2nd City Comedy school because I'm sure they wouldn't object if I signed up for another $300-and-change comedy course. 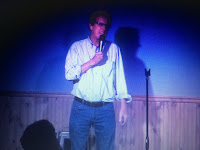 A: No. Mind you, if I did it wouldn't be the first "I'll-never-do-that-again" promise I broke within hours of making it.

Q: Any regrets?
A: I should have rehearsed.

Q: Du-uh. Anything else?
A: I forgot to use a scatological joke that I wrote involving self-defecating humour. 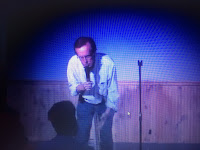 Q: Good. Anything else?
A: I felt a bit bad for stealing the "cowards run in our family" joke from my brother Alex but I'm over it.  Besides, what are brothers and sisters for?

Q: Any chance you went to all this expense and trouble just to post that "teachin' Chong" pun?
A: I'd put money on it.

Q: Do you ever get tired of talking about yourself?
A: You wish.


Posted by EditorPete at 8:19 AM No comments:

Going out not with a whimper but with a Banksy

There is a big art show going on right now in a gallery that Google says is a 15-minute walk from my house. According to a beautifully composed story by the Toronto Star visual-arts critic Murray Whyte in this morning's paper, tickets to the show are $35 and the organizers have already sold 50,000 tickets.

The story also mentions the show runs until July 11.

On another page of the same newspaper, a full-page ad in the front section tells us the show, called the Art of Banksy, has been extended to August 19.

I'm pretty sure the discrepancy exists because the entertainment section of the paper was printed a few days before the front section, and the ad came in late.

And I'm telling you this only to remind you that we here at Pete's Blog & Grille know a thing or two about how journalism works. After all, we've been at it for more than 30 years.

But you sure wouldn't have believed that if you were with us, rather me, yesterday around 7:00 p.m.

You'd have thought, "He's lost it. Like the guy in A Beautiful Mind minus the math skills."

I was very close to home in my wife Helena's black VW Beetle; the radio was tuned to this country's best radio news show, As It Happens (AIH).

How good is AIH? It's been on-air since 1968. When I was in journalism school, I'm pretty sure most of us students thought landing a job on AIH would be like winning an Olympic gold.

An AIH trademark? On-air interviews with people within the very heart of breaking stories around the globe. The host would talk to, like, IRA rebels in a Belfast tavern or some Sandinista hostage-takers in a Managua, Nicaragua, bank. Or maybe a junkie poet a rich rock star ripped lyrics off from. Very compelling journalism.

I recall clearly the day one of our reporting teachers brought in a guest speaker named Lloyd Tataryn who--drumroll here--worked for AIH and, more importantly for me--more drumroll--came from my hometown of Sudbury.

For me, that single visit drew open the curtains on a world of possibilities.

Jump ahead now to yesterday, when AIH host Carole Off was interviewing Toronto artist George Warner.

Warner had sort of photo-bombed the big Banksy exihibit by staging his own art show, on a fence across the street.

He was protesting because he thought the Banksy show is emblematic of everything wrong with the Toronto art scene--it's rife with pretense, grant money goes to the wrong people; it's a snooty game--you know the arguments. I really don't have an opinion on the matter.

What I do feel strongly about is me having fun.

So I turned around and headed to the gallery. I was going to drive slowly by, roll down my window, yell "Hi and by George," beep the little Volkswagen horn and because that was George's voice coming from the dashboard speaker, and this is where it gets freaky--I'd hear me on the radio.

I got to the gallery. I saw the art on the fence.  Warner was easy to spot. He stood beside the paintings, wearing--I love this--a black leather kilt.

There was, of course, no interviewer in sight.

Remember Tataryn from back up there in paragraph nine? I'd be lying if I didn't tell you he sort of burst my bubble when he told us that most AIH interviews seldom happened as we heard them. They took place earlier in the day.

Which is something I completely forgot driving to see George Warner.

I pulled over anyway.  Beeped the horn. I rolled down the window and out flew a lifetime's worth of professional credibility.


Posted by EditorPete at 9:54 AM No comments:

That was two months ago. She'd just finished her seven-minute-and 44-second stand-up comedy routine at Second City, in downtown Toronto.

Ev had taken a six-week course (three hours a week) after which  the students climbed on stage to wow us with their performances. (Want to see Ev's? Click here")

I did as I was told.

So, on Tuesday, June 19, 2018, A.D., I will be on stage. Alone. With microphone in hand.  I'm four weeks in to the course and, even though I have no idea what's going to happen when I actually do my act, I thought I would share 10 reasons--in no particular order in fact I'm not even sure I'll get to 10--why this weird turn of events has been one of the best adventures ever.

1. For the past few weeks I've been able to spend three hours every Thursday evening with the other students; 10 or 11 (I'm too lazy to count) of the funniest individuals I've met. Think about it. These are people who want to be stand-up comics. We've got two advertising executives, at least one lawyer, one high-school teacher (oh baby Jesus where was a teacher like this when I needed him?), and OUR teacher is a woman named Precious Chong, whose father is Tommy Chong, of the comedy duo Cheech and Chong.

2. When you come from a family like mine, this sort of thing is heaven-sent. Different families reward various achievements; some parents favour high marks; others like hard work and stick-to-it-iveness. In the Carter household, making people laugh was as important as food. April Fool's Day is a high holiday. Also. In a church-going household like ours, the only fact you know for sure is, anything's possible. Including the possibility that when the course ends and I get to take the stage, my late mother and father will be watching from heaven.  I realize that the thought of your dead folks being able to see you from heaven is seriously creepy--"can she really see me? even when I'm the bathroom??" but never mind that for a moment. I want to make them proud.

3. My Second-City show will make my older brother Alex jealous, a fact that pleases me immensely.  When we were young, Alex starred in quite a few high-school productions that I watched with envy and admiration. The only dramatic production I ever got a part in was the Sudbury Secondary School presentation of "David and Lisa", a weird old play that takes place in a mental asylum. I landed the very minor role of Simon--the challenged, mysteriously gendered and lonely flute player, which was lots of fun for Alex, because in real life I didn't get a lot of dates, my name, Peter, is actually based on the name Simon (look it up) and I did take flute lessons and, well, moving right along...

4. I just remembered something. Our "David and Lisa" never got performed. For some reason, our theatre arts teacher decided it wasn't to be a stage show but rather a video production and even though we spent hours and hours in the studio with cameras and everything, a final "David and Lisa" never materialized.  Not that I've been carrying this around with me, but once in a while I'll be watching late-night TV and see the name "Kevin White" in the credits as an executive producer of something; and that's the same name as one of the kids in our production--I think he was David--  and when that credit rolls across the screeen; I wonder why my name's not up there.

5. Think about it for a second. Growing up the youngest of five boys and hearing, from the time you're born, that your older brothers are all so good looking or bright. My next oldest brother Eddie was on the Sudbury Secondary School Reach for the Top Team; the eldest, Pat, was so clever he skipped grade seven; Tom had a sports car and could play the trumpet like nobody, and when he was in grade 10 Alex was once on local TV for some reason and my best friend Trevor MacIntyre's mom saw him and said "your brother's so handsome!"

6. One time, Eddie was tapped to play a solo on his Fender MusicMaster electric guitar with the Sudbury Secondary School Orchestra behind him and when the conductor Linda Brault introduced him, she said something along the lines of, "this guitarist might just be a boy from the west of end of Sudbury but he plays like he's got southern blues in his soul."

7. Did I mention that I was also the shortest of the bunch?

8. But back to Second City.  I also have five sisters. Which reminds me that in Carterland, we don't converse; we compete. Two days ago, my sister Norma and I had this very discussion on the phone.  She was going on about something and I admitted to her I wasn't actually listening to what she was saying as much as I was waiting for her to be done so I could say something more interesting than what she had to offer and she asked me if I was done yet. If you think I'm kidding, you don't know my sisters.

9. Now I'm really scared. I'm thinking, halfway through my performance, I'm going to be looking out in the audience and I'll hear somebody say,  "Pete, do you have a comb?"  I'm not sure who first came up with this but when we were growing up, if one sibling interrupted the other with "do you have a comb?" it meant "what you're saying is really boring."

Posted by EditorPete at 7:04 PM No comments: