My mom, the birds, the bees, the books


Hands up everybody whose mom was a nurse. Now those of you with your hands up, how many of your moms told you the facts of life?

Just as I thought.

Nurses might know about where babies come from and what goes where but did they ever share? No-o-o-o-o-o.

I have decided that my mother the late Huena Carter (nee MacIsaac) studied hard and worked for next to nothing to become a nurse just so she wouldn't have to tell her kids about biology or sex.

Instead, she let us learn the way God intended: By osmosis and her supply of lurid nurse texts. (Text books. The other kind hadn't beeen invented.)

Some facts of life, I got from a kid in our neighbourhood though I didn't believe a thing he told me.

I was single-digits old,  I could name who I was with but won't, and  the crazy scenario he painted about what people got up to was just way too weird to believe and in fact from my little boy perspective physically impossible.

Had the same feeling a few years later when my older Eddie told me about the president of the United States' friends breaking into hotel rooms. I was like, "That could never happen. How stupid do you think I am?"

Some facts of life I got from a book one of my older sisters bought.

It was called Sex and the Single Girl and it got left it in a little cupboard in our upstairs john within easy reaching distance. After it had been read through a few times, it fell open to the best parts.

"The bookshop's shelves are full of books
Some dirty and disgustin'
But you can tell the worstest ones,
They never need no dustin'."

Speaking of bookshelves, in the basement of the house we grew up in, there were hundreds of books and on the second shelf from the bottom, down on the right hand side, close to the downstairs bathroom that only my dad had the guts to use, sat a couple of mom's nursing textbooks.

I remember one about surgery, the best part of which was black and white pictures of all sorts of deformities--brains growing outside people's heads and little boys with leprous arms and other grotesqueries; horrifying enough to cause nightmares but impossible to not look at.

But the book that never ever needed any "dustin'" had about three quarters of the way through, a chapter on human anatomy. With miraculous acetate overlays. At one point, you'd be looking at some bare bones; then with one acetate sheet, there'd be veins on the bones; another would add muscles and then  the last -- tu-duh --showed us what a bare naked person of the opposite sex looked like.

If the book had words, I sure never read any of them.

Besides, I may not have known how things worked, but I knew what they were called. Huena had so many names for our private parts I could do an A-Z list of them, and still have some left over.

But I'll hold on to them for now. Wait. That didn't come out right.

About one hour ago, I finished work for the day, closed my computer, shifted from the north end of this old red chesterfield to the south end and picked up a book called Garden of The Brave in War, Recollections of Iran, which is one of the most enjoyable books I've found in, oh, let's go with a week. 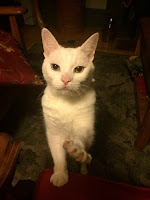 I started the book on Saturday and was quite looking forward to it after work today and thought, heck there's nobody else around so I might as well lay flat on this couch and get back into it.

The writer Terence O'Donnell, lived in south Iran for a few years and sort of took the same approach to travel writing as I would. In other words, he talks to everybody he meets and says yes to every opportunity so winds up sleeping in strangers'  houses, spending entire weekends with opium smokers and vodka cadgers and going on big game hunting trips over the course of which not a single bullet gets fired. 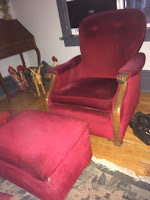 At one point, O'Donnell finds himself face-to-face with a senior-citizen-aged panhandler in the middle of nowhere, Iran, named Baba Abbas who, if you refused him money flashed you, so you pretty much had to pony up.
Like I said...my kind of travelling.

So down I lied to resume reading and what  happens?

Iris the cat climbed up on the back of the chair from where she looks out at the world and assumed her position.

You should know that the red chair that Iris perches on is mated to this couch. I grew up with this furniture.

I have no idea how old it is but it came from my parents' house and I know that when my grandson Mateus was an infant and fell asleep where I was lying, that made him the fourth generation male Carter to carry on the proud tradition of passing out on this chesterfield..

This couch and chair are the dial-up Internet of the modern bed-sofa. 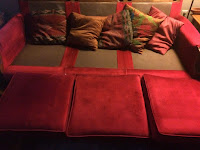 The chair flattens out and when aligned with its matching footstool, becomes a single bed. The back cushions of the sofa can be removed and laid out in front of the main part then the other cushions laid on top of them so in effect it becomes a double bed, admittedly a horribly uncomfortable one, but still.

Laid out thusly it looks like the kind of surface that writer O'Donnell found himself flopping down on in strangers' houses in Iran.

My point, though, was just as I stretched out on the red couch ready to read, what does Iris do? She climbs up and sits in the window.

This should not seem to a normal person like a time for quick and covert action but Iris's personal sign writer had assembled a few bon mots, (I know, I know) about a week ago but Iris had selfishly avoided sitting in the window behind the sign to get her picture taken.

I had to get up from my red comfort, unplug my charging phone, walk softly to the front door, make the decision to NOT PUT SHOES on because you never know how long Iris is going to stay put; I opened the door, peeked over to see that she was still in the window (she was). I walked in my sock feet to the walkway in front of the house, camera at the ready, and what does Iris do?

She jumps down off the back of my late father Tom's chair. And with a flick of her tail implies: "I'm glad you're finding those Persians in that book so fascinating, but can they make you walk outside on a wintery day in your sock feet?"

Every day I'm more convinced that Iris is a reincarnated relative.

And I just remembered something my late brother Tom used to do when I was little.

I would be leaving a room and Tom would say "Peter wait a sec. Come here. I've got a question for you."

I, because I'm an idiot, returned,  and Tom asked, "How far do you think you would have been if I hadn't called you back."

We laughed and laughed.

I forget what my point was.

Posted by EditorPete at 3:11 PM No comments:

A couple of thinks we take for granted

Just this morning I was making a sandwich and used a butter knife to spread the butter, mayo and mustard and a serrated knife to slice the tomato. Two knives for one sandwich.
You might think it's a bit much: I could have used one but it's easier to cut a tomato with a serrated knife, and when it comes to spread, you get more food-per-square-inch-per-swipe with the butter knife. (I know. This is not something you have to be told.)

But I wondered: Is two-knives for one sandwich extravagant? And I also wondered: Am I weird?

Making a sandwich takes more brain energy than you might think.

To wit: In our fridge door, we have not one, not two not three but four -- French's, Hot, and two types of Honey-- mustards. And we're certainly not mustard snobs.

I'm not complaining. In fact it's the opposite.

The salami in our fridge arrived pre-sliced in a pre-perforated re-sealable package that you only have to grab a little corner of plastic to open. Then when you put it back in the fridge it won't dry out and be too hard to make a good sandwich next time.

I don't want to sound like a K-Tel commercial, but really.

Not very long ago, packaged meat came in almost hard plastic wrap that you sometimes had to use your teeth to open. Or the scissors, and when it came to resealing it so it wouldn't get stale fast, you were left--God give you strength--to your own devices.

I don't know why I awaken every morning with in this googly-eyed  state of awe; amazed that I was born into a world of staggering convenience, comfort and choice, but I tell you--on Planet Peter--every day is Thanksgiving.

Just last week, I was walking west along our street when I met a neighbour named Jeff, and Jeff asked how I was doing.

This is what he got.

"Not only am I doing great, Jeff, I'm getting better.

"I was at the optometrist the other day and he told me my eyesight is actually improving. He said I don't technically need my glasses to drive any more."

Jeff was impressed. He said so.

"I said 'you mean to tell me I don't have to have that little "x" on my licence?'

"And the optometrist said 'nope.' He asked me for my licence, wrote  some stuff down on a form and was like, 'there, I removed the x.'"

I had more to say to Jeff and he's a retired school teacher and very patient.

"I'm still not comfortable enough to drive without'em  though. It's like, they're a security blanket. And as my brother Tom used to say, 'I can't hear you without my glasses.' But I don't need them."

My vision has improved. We live in wondrous times. And Jeff is tolerant.

What I didn't tell Jeff was as I was leaving the eye doctor's office, I said, "I hope you understand I take full credit for this. Exercise, healthy eating.

"I look really hard at stuff every day, give the eyes a real workout."

Finally adding, "Actually, it comes from the fact that I look at the bright side of everything, all the time."

My wife Helena once told me I can look on the upside of death.

I'd hate to actually have to live with me.