She Coaxes the Blues Out of the Room, Mayme

"I’m ready to go, Pete,” my cousin Mayme Millar told me yesterday, just around suppertime. “I’m ready to see Mom and Dad and Grandma and Leona and everybody else.

"In fact, I think I know more people on the other side.”

And then she laughed.

Mayme’s 64th birthday is this coming Friday. Although she’d like to make it to her birthday, she might not.  But, she says, that would be okay, too.

About a decade ago, doctors told Mayme she had very serious cancer. Ever since, she says, she knew the end was just around the corner. This morning she told me that every day since her diagnosis has been a gift.

Mayme remains with her husband Grant at their home in Crystal Beach, just a few minutes west of downtown Ottawa. Their daughter Jessa, 28, lives in the capital and their 30-year-old chef son Peter was at home with his folks when I visited today.

Exactly two days ago we received a surprise email from Mayme’s sister Nancy.  Mayme was fading fast, Nancy wrote.  I hadn’t seen her in a few years, but in a family like ours, time doesn’t matter. “You have to go,” my wife Helena said.

I arrived in Crystal Beach mid-afternoon Monday and that’s when Mayme told me she’s ready to see her folks again.

Mayme’s mom, Inez, was my late father’s youngest sister. Get this: Inez died in 1965, on her 43rd birthday.  Mayme was just 13. Nancy was 14. They had three younger brothers, Mike, Pat, and Joe, and another sister, Marjorie, my age.

Six kids under 15. That’s what their father Walter Scott was left to take care of.

I was eight. An eight-year-old wouldn’t have the foggiest how hard that life would have been.  All I knew was that whenever we visited the Scotts at their place in the country, I was guaranteed a good – and in many ways—educational—time.

Maybe because they were country cousins; or maybe because they had to grow up fast. But Mayme and her brothers and sisters always seemed to know stuff I was completely in the dark about. Cars, motors, animals, guns, girls, the works.

Once when we were little the three Scott boys and I were poking around an old pick-up truck on a property next to theirs. One of them told me to check under the truck so I’d see goslings. Not having any idea what I was supposed to be looking at, I commented “cool” and then reported the fact to my dad, later. The truck was no only blue and in good shape, it came with goslings. Whatever they were.

Two years after their mom died, 16-year-old Mayme was in a near-fatal car accident.  I’m fairly certain she never completely recovered from the injuries.

These days, knowing how much money they didn’t have and how many foundation-shaking problems can arise with a family of six teenagers crammed into a small house—never mind that one of them almost died in a car crash—I shake  my head in awe of their resilience.

People who make it through such times are my heroes.

Not only that, but Mayme’s entire family has always been super good to me.

When I travelled from Sudbury to attend Carleton University in Ottawa, Nancy and her husband Don, Mayme, Grant, Mike, Pat, Marj, Joe, their spouses and eventually their kids were my second family. They fed, watered, and entertained me. They kept secrets and helped me find my way out of trouble.
Their kitchens were always open or, if I needed a place to crash, they offered up a couch.

I also really really love the fact that Mayme and Grant chose for their handsome son the elegant handle Peter. If you ever want to win a relative’s heart for life, dare to give one of your kids that person’s name.

Here’s an aside I’ll never forget. The second-last time I visited Mayme’s homestead in Fallowfield, it was for some other family gathering and I drove out to St. Patrick’s Church, which is just up the road from where the Scott kids were raised.  In Irish Catholic families like ours, the local parish is as much a part of the household as your kitchen. And among Walter’s parish jobs was tending the parish cemetery. Which is where he was when I arrived.

I drove to the graveyard, got out of the car, and saw two men standing among the tombstones. One was Walter, who introduced me as his nephew, from Toronto.

“Toronto, huh?” the guy says, “We just buried a guy from there.”

I like people who take death in stride. As if it’s part of life. 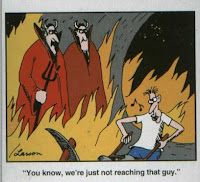 While I was visiting Mayme yesterday and today, she had a parade of visitors and phone calls, so much so that Grant now acts as her fulltime personal assistant. Between carefully feeding her ice water, adjusting the bed, offering food and  words of encouragement, he greets  and provides full detailed reports to the various health-care and personal-care aides who drop in to check on Mayme’s well-being.

Grant is also manning a carefully scripted calendar to keep Mayme from being overwhelmed by visitors.  And with such nonchalance!  It reminds me of that Far Side cartoon where two devils in hell are standing over a guy shovelling coal and whistling. One devil says to the other: “You know we're just not reaching that guy.”

When I think about it, it was wasn’t only Mayme, Grant, Peter, Nancy and the rest of them made saying goodbye far easier than I expected.  All of us have grown up in a very specific culture that is just plain comfortable around the whole death thing.

Religion helps to be sure, but so does that fact that Mayme and I were able to laugh—yes laugh, yesterday—about the fact that our Grandmother Carter had a book called  “Irish Wake Amusements" on her living room coffee table.

And after we finished laughing, I told her I had to head back to Toronto.

So we gave each other a rib-threatening hug and a kiss on the cheek. Our last conversation went as follows.

Me: “Mayme, you’ve always been a role model for me.”