The Tour of A Life Time. Or Maybe a Life Sentence.

This is too weird and rare not to share. In mid-June, my 25-year-old daughter Ria and I toured the now-closed Kingston Penitentiary. Yeah, that Kingston Pen.

It’s 178 years old and for many years was home to quite a few household-name inmates. Corrections Canada closed the joint in 2013. (And no, they didn’t lay all the prisoners off and send them home; they were dispatched to various maximum security facilities around the country.)

After the closure, the authorities invited local people in for tours. Something like 18,000 people took them up on the offer.

So this year, the St. Lawrence Parks Commission very smartly re-introduced the idea and tickets are going fast. I recommend buying one. Check www.kingstonpentour.com.

Kingston Pen is unlike any historical site you’ve ever seen.

But at the same time the tour paints for you a portrait of a sort of bizarre community of souls—staff and inmates—with eerily interwoven interests.

One reason that the tour is so powerful is that former staffers are on hand to describe what life was like on a day-to-day basis. They look you in the eye and tell you about how proud they were of the work they were doing with the incarcerated men and you understand that basically, everybody was doing the best they could under lousy circumstances.

And while they won’t name names, the guides answer questions with surprising candor.

The first place you go after entering is the children’s room, where inmates could interact with their visiting kids. Posted around the room at various sites are little 8x10 signs, advising the inmates of things like ‘interfering with children other than your own is a serious offence’.

There, we were greeted by a soft-spoken woman who had started her career as a nurse but rose to be the “keeper” of the penitentiary, a job she had until 2013. “That meant,” she said, “When the warden went home at night and on weekends, the jail was mine.”

We went past the row of cabin-like houses designed for conjugal and family overnight stays. The guide (another former guard) says the houses were always booked and when in use, the inmates could order in pizza, if they wanted to.

Then it was on to the main range, which looks like an old-fashioned jail from a movie set; just as you imagine one to be.

At one point, while our tour group of 20 was examining an actual cell—still containing the unmade cot (as if the inmate had just stepped out for a minute), the little TV, and some homemade decorations—the guide/guard  demonstrated how staff made announcements. He yelled “Jug UP!” with such vigor and volume it was arresting.  “Mostly,” he told me afterwards, “we didn’t yell like that.”

Hands down the hardest site in the place is the row of tiny, barely-bigger-than-a-minivan segregation cells, where certain prisoners (some of their names you know) spent 23 out of 24 hours of the day, isolated for their own safety. The only thing a prisoner can do in there, the guard says, is read.

At the end of the row, a door leads out to an equally tiny dismal fenced-off patch of grass, which is where the isolated prisoner could, if he wanted to, spend the 24th hour.

The guard said all maximum-security federal pens across Canada have these isolation cells and, she added, they’re all full, all the time.

Much of the tour is given over to the shops, where prisoners held down real (albeit miserly paying) jobs, such as assembling locks for Canada Post mail bags. (The irony was not lost on the guide.)

Another small square brick structure, just south of the main gate, is the I-T building.

And it was in there that one of the most surprising chapters of Canadian Penal History unfolded; something I hope somebody someday makes a movie about. Knowing about what happened in the I-T shed changed everything about my visit.

As you exit through the gift shop, you can purchase, for the sale price of  $5, a CD called “Kingston Penitentiary Is On The Air. Inmate Radio Shows Live From 1952.”

According to our guide Luke, the CD had been recorded in the I-T building.

The CD cover reads: “In the spring of 2000, two dusty CKWS radio transcription discs, part of the collection of the Penitentiary Museum, were sent to the audio restoration specialist Graham Newton, of Toronto. Although we knew that these recordings had something to do with a radio show, their content was a complete mystery.”

“What came back was a CD containing an hour’s worth of performances by inmate entertainers from Kingston Penitentiary as originally broadcast over the public airwaves in the summer of 1952. The quality and professionalism of the performances was simply astounding.”

The KP inmates did songs, skits and even parodies of commercials; e.g., “If you use Keen&Peachy Hacksaw blades, you’ll find no holds barred and no bars will hold.” 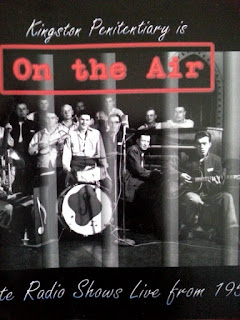 The show was broadcast on numerous small town radio stations across Canada including I think my hometown of Sudbury. The performances are nothing less than Massey-Hall worthy.  If you’ve ever seen “A Prairie Home Companion,” the movie about an old-time radio show, written by Garrison Keillor, you’ll know what ‘KP is On The Air’ sounds like.”

Across the street from the Pen sits the Kingston Penitentiary Museum.

The curator of the museum—he’s been there for 30 years or so—is Dave St. Onge. He is largely responsible for assembling the CD. (It’s also for sale in the museum store.)

I phoned to ask permission to post an excerpt on this blog. He happily agreed and then I asked if he knew any particulars about the performers. Might any still be alive?  I estimate that if they were serving time in the mid '50s, any survivor would now be in his early 80s.

He said they only went by first names but he was pretty sure that Edwin Boyd of the infamous Boyd Gang was one of the performers. “But as you know, he passed away a few years ago.”

“That was one of the problems with the show,” he said. “The performers kept changing.”

Listen to these voices.  And the musicianship. Think of the practice and discipline it took to get here.

Think of the natural talent that was—and probably still is—locked up.  Try to tell me you’re not amazed.

To enjoy Kingston Pen is On the Air, click below.