About 35 years ago, when I was just starting to work as a professional journalist, a friend gave me a beautiful gift: A matted, framed and magnificently illuminated print of The Lord’s Prayer as it appeared in the Gutenberg Bible, which was produced in 1450. It was the first book ever printed using moveable type. 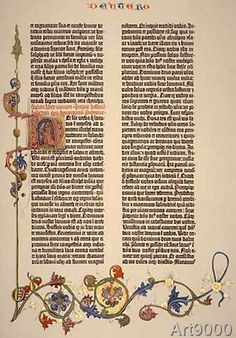 I’m kind of sad to report that I know where neither the print nor said friend are now.

But I do know that Time magazine once named Johannes Gutenberg “Man of the Millennium,” in recognition of the fact that his invention made books, reading, literacy and all that good stuff available to way more people. (Never mind the fact that Gutenberg put a lot of scribes out of work. Ha-ha.)

Also, earlier this week, in a Toronto Star story, a Ryerson University Professor named Anne McNeilly was discussing some print-magazine cutbacks at Rogers Publishing company and she called the moves another sign of the “end of the Gutenberg era.”
We are now in what I guess is the digital age.

And as a guy who has lived, breathed, profited from, had way more fun than I deserved to and fed a family based on
work done around the printing business, all I can say is…
"Phew! That was close."

Here’s what I mean.  (Because it’s Thanksgiving, I thought I’d pen a little prayer that sums up my feelings on the matter.  I’ve written lots of things before, but never a prayer. It feels weird but heck it can't hurt.)

Thank you so much for putting me on this earth when You did.

You know my laughable skill set, Lord. And my aversion to hard work.

You know I was the poster child for ADHD before ADHD was invented.

And You of all people know what kind of physique I come with. Please forgive me for lying to my daughter Ria last week when I told her the reason I opted not be a professional athlete was that I don’t like showering with strangers.

We’re talking about a guy who hit his stride in grade seven, as number 21 with the St. Albert Saints basketball team. In my best game, I scored five points—three for our team and, in a fit of exuberance that saw me run the wrong way down the court—two for the other guys. So sports was out.

You’re more than familiar with my wood-working skills, God. (Somebody else labelled them “would not-working” skills). If my kinfolk relied for survival on my hunting and gathering deftness, we’d be down to fried mice in a week.

Soldiering’s out, too. I fight like Tinky Winky the Teletubbie.

Me and business? Hah. My wife Helena tells me I’m the only person she knows who barters upwards.

Neither am I senior managerial material.  I can’t play golf and tend to suck down rather than up.

I cook by ordering in.  I tried gardening once, but skinned my knee. Which reminds me.  About 14 years ago, we were visiting my wife’s cousin Bogdan’s house when his young son Kamil fell and cut his leg. His father and I whisked him off to the nearby emerg, and the attending physician asked if I would like to remain in the room to watch him work.

Because I love new experiences, I was like, “Sure!” As soon as he started, I realized that my eyes were never meant to be laid there. My stomach felt yucky, my temperature rose and I hightailed it.  I would have made a terrible health-care provider.

And while I have Your attention, thank You for covering everything up with skin.

Plus I’m organizationally challenged and I’d rather do my own dental work than fill out a long form.

I can’t account for my productivity or explain why I do stuff. My fellow citizens will join me in thanking you, Lord, for peopling the public service and bureaucracies that serve our wonderful country with folks who aren’t me.

Add to my lack of skills the things I like to do—eat, drink, try new things, go on adventures, watch people, talk to strangers, read and invent stories—and You don't have to be You to know I would have been a lousy, say, 16th century peasant.  Or anything else.

So as we watch the Gutenberg era fade in the rear-view mirror and embrace the future, whatever form it might take, I have this prayer of thanks to offer.

Thank you so much for planting me on to this planet during these economic times and in this country and during the sole and very brief time in history during which a guy with my skill set could earn a proper living and have a hell of a time doing it.

Print journalism—populated as it is with so many people who put up with Yours truly--has been very very good to me.

Any other era, I’d have been, at best, village idiot.

Posted by EditorPete at 9:55 AM