What I Do When I Should Be Working

Just found a letter I wrote to my son Michel earlier this year, a few weeks before his son, Mateus, was born. I asked Michel's permission to use it for this week's blog. He assented.

It’s Monday morning and I’m sitting at my office thinking about writing a story about car repairs for one magazine and another story about immigration for a second magazine.

But mostly, I’m thinking about  you.
There’s a very good chance that by the time you get this, you’ll be a dad.

And you’ll find it’s the most important thing you ever do. None of the stories I’ve written; none of the trips that I took; none of the silly songs I wrote or sang are anywhere near as important to me as you and Ewa and Ria.

So because it’s Monday and I don’t feel like writing about cars or immigrants, I decided to come up with an A-Z guide to being a dad.

Buddies: When you were in grade six or seven, you wrote an essay and it included the observation that “it would suck to have no friends.” You were right then and you’re right now. As you might have noticed I’ve stayed in touch with quite a few old buddies over the years.  They would not believe me if I told them how much they’ve helped me get through stuff.  Being able to talk with other guys about what we’re all going through with our jobs, wives and children makes problems go away.

Children: The meaning of life. Other things are important too but mostly? It’s your kids. My friend Kate Zimmerman once commented “It’s a good thing people who don’t have kids don’t know what they’re missing because they’d be sad all the time.”

Dads: When I was 19 and got in trouble with the law, my Dad never criticized me; he knew the courts and police and everybody else would do that. He was just there for me, every step of the way. He still is today. And you will be for your children.

Enjoyment: I’m sitting here trying really hard to remember a time that I was having fun with my kids doing one thing but thinking I’d rather be someplace else.  Pretty sure it never happened. I  wish my father were still around so I could ask him if  being with me was anywhere near as enjoyable for him as being with you and Ewa and Ria  is  for me.  Michel, I find it hard to believe that it could be so. But I think it was.

Fathering. It’s a big joy-filled job but you’re a big healthy man and you know what it takes to be a good Dad.  I am not worried about you doing it right, not one bit. I’m looking forward to watching you though.

God. Whether you believe in God or not, I will tell you one thing I know for sure. I thank Him every day that your birth mom was smart enough to recognize that she wasn’t in the best position to look after you so I got to be your Dad.

Happiness. You’ll be happy when your children are happy. Period.

Intuition:  Here’s a secret to surviving your adventure across the Dad universe. When it comes to caring for their kids, moms know what’s right. They can sense if a child is sick or hungry or cold. They can read a child’s mind. And they will do what’s right for their children. A psychologist once told me that “mommy pussy cats know how to look after their babies; mommy sharks know how to look after their babies; so mommy humans know, too.” However. Human moms are the only ones who sometimes lack confidence and will doubt their decision-making. So your job is to listen to them voice doubt and listen as they talk their way through problems. But in almost every situation, moms will know what’s best for their children’s care.

Kidstuff:  One of the best things about being a Dad is you get to be a kid again, with your children. I’ll never forget the trip that you and I took all by ourselves many years ago, from Toronto to Little Current and back, to get the pinball machine. One of the best parts of the trip was hanging around the ferry docks at South Baymouth, waiting for the boat. There were 100s of fake little inukshuks on the rocks and we ran around knocking them over into the puddles.  It was so much fun. Having kids is. Before you came along, I never went downhill skiing. I never played tennis or marched in a Santa Claus parade. I never rented a snowmobile or an off-road motorcycle and wouldn’t have done any of those things without you.  My wish for all Dads is that they would get opportunities to play like that. That crazy Hummer ride up the mountains at Whistler was pretty cool too.

Love: My father used to say “we throw this word love around carelessly and don’t even know what it means.”  Some people maintain they love their cars; others say they love travelling and rare steak. The only thing I know I love with unquestioned certainty is my family. I love my sisters and brothers and I love your mom and I love Ewa, Ria, and some of my good friends, but I love each one of them differently. Like my Dad said, we try to make the one word do a whole lot of work. We have more words for “drunk” than we do for love. Weird eh?

Moms. Trust me on this. They love their kids just as much as dads do. Imagine that.

Naps. When your baby is very little, make the most of his nap time. Sure you’ll be tired sometimes but sleep is over-rated. Teenagers need eight hours but adults don’t. When your baby’s napping, see what you can do to help his mom.

Obligation. Big scary word huh? Well it’s not scary at all. Many times over the years, you and your sisters told me I wasn’t obliged to do things for you. But the fact is, I didn’t feel obliged I felt privileged to do them. You and your sisters are huge gifts to me. So if I can make your life any better, I want, need and love to do it.   In my book, obligation means the same as gift.

Peter. Just threw this one in in case you have another son and can’t think of a good name for him.

Quiet. Ninety nine percent of the time, you’re better off not saying nothing.

Role Modelling. Your kids are watching everything you do and will continue to do so for your whole life. If you ever have doubts about whether something you’re doing is right or wrong--whether it’s at work, when you’re  out with friends or at home—just ask yourself ‘what if my kids knew I was doing this?’  You’ll know right away if you should be doing it or not. I’ve always said that we should behave at work as if our kids were watching.

Sex. I seriously hope you didn’t expect me to say anything about this.

Talk.  Your aunt Bertholde once told me that the more you talk about a problem, the more likely you are to find a solution to it.  Don’t be afraid to talk about things that trouble you Michel. I think you’ll find that other people have had the same troubles; and there’s an old Irish saying “A problem shared is a problem halved.”

Unconditional love. You’ll have it for your kids.  And maybe your immediate family. But definitely for your kids. No matter what they do you will love them. Someday your son will come home and announce something that will take your breath away. I have no idea what it will be, but he’ll do it. And even though it’ll be the furthest thing from your plans, you will accept what he says, wish him the best and love him unconditionally, for the rest of your life.  I’m not making this up. You’ll see. It’s miraculous, actually.

Voyage. Being a Dad is like going on a voyage around the universe and while most of the time it will be exciting and fun and it’ll take you places you’ve never dreamed you’d go; there’ll be times when it will be so scary you won’t want to think about it. You know what being scared is like, Michel. I do, too. But you’ve come through some terrifying experiences and just remember. You came through them! They’re over. You’ve beaten them back and now you’re doing something else.   I am so proud of the fact that you built that mahogany boat. It’s the only part of the cottage that I don’t want to sell.  It will always remind you of the voyage that you’re on. And your son will be able to drive it too.

Wives. Or partners.  Generally speaking, having two parents around is better than having just one. Sometimes, it’s impossible to have two and single moms and single dads can be wonderful parents on their own; especially if the alternative is raising kids in an unhappy and dangerous environment. But generally, it’s far easier to have two people around if only because one of you can make the lunches while the other does the laundry.

X As in the symbol for kisses. They’re very important and good for everybody’s health.  It’s impossible to kiss your kids or your life partner too much. At least that’s what I think.

Yes. I’ve found life much more joyful and  rewarding when I answered “yes” to all of your and Ria’s and Ewa’s requests, no matter what you’re asking for.  (Though you never asked for much, ever.) As my old friend (and a guy who likes you very much. We attended his 80th birthday party in Cambridge not long ago) Ernest Hillen says, “you can always get no someplace else.”  I figure the stuff you would get a “no” for,  you wouldn’t ask me anyway.

Zoe. In Greek, it means “life.” I think we can see why. In your case, half of your new son will come from Zoe, half from you and he’ll have the best attributes of both of you. He’s going to be amazing. Just like his Dad. 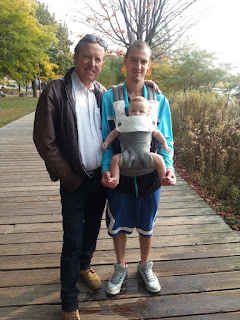 
xxxx
Posted by EditorPete at 2:45 PM