Where you Winsome and lose some. But mostly win.

See that smiling lady in the photo? She's Winsome. 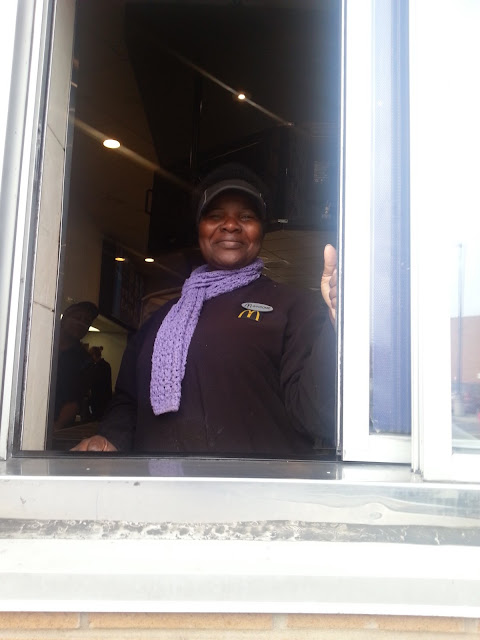 Google tells us winsome means "attractive or appealing in appearance or character." And Google uses, as an example, "a winsome smile."

I took the picture about two hours ago. But it was more like 10 years ago that I first spoke to Winsome and told her she had the perfect name.

That was also the first time I went through the take-out lane at the McDonald's where Winsome works. And that visit didn't come long after I started working in this office where I am today; where I'm spending  this final  day, in fact. Come Monday, I'll be working  from home full time.

Over the years I likely visited Winsome's McD's a few times a month. But  I should add this: I've heard  that when a doctor asks a Canadian guy how much he drinks, the doctor usually listens to the answer and then doubles it to get a nearer-to-the-truth amount. It's probably the same when you ask a guy how often he eats at a McDonald's.

I'd like to tell you more about Winsome but when somebody's working the McDonald's pickup window, they're seldom in a position to converse, per se (Get it? Converse? Per se? Never mind.)

There  always seemed to be somebody behind me in line and McD's staffers don't get a lot of free time. Indeed, it's maddening that the rest of  the world fails to run on my schedule. But I'm pretty sure Winsome doesn't know my name and that I think about her more than she does me.

But something very nice happened between me and Winsome today.

Like I said. Today's my last day here. I spent a good deal of time cleaning up. I didn't want to take a long lunch so at about 1:00, I hopped into my Malibu, drove six minutes to McD's for something to go. (That always makes me think of my cousin Joe MacDonald. He told me that the guy working in the  kitchen at Gus's Restaurant near our house must have been named Tugo, because the order taker at the cash register out front would yell "two cheeseburgers Tugo!" But I digress.)

I got to the order window and told the order taker I'd like a Greek salad. Tugo. McDonald's salads are quite tasty and I'll never forget the first time I had one. Yes, it was at Winsome's; in fact, the day I ordered it, I pulled up to the takeout window, you know who opened it, handed me the bag but said "Hey! Look at you! Having a healthy salad! Good for you!"

Yup. I'd be lying if Winsome's heartfelt cheer of enthusiasm didn't affect my McDonald's buying habits from then on. I've eaten healthier since. And newsflash: McDonald's salads are just as palate-friendly as anything else they make.

You never can tell, can you?

So, after all those years, today finally arrived. I took my final trip to the drive-thru. I ordered a Greek salad, paid at the cash booth, then drove slowly up to the pickup window.

She greeted me like a long-lost cousin, albeit one that I was meeting in jail. We were separated by glass, after all.

I asked if I could take her picture. She asked why. I said I was moving on; that this might be the last time I visit her and I'd like to write about it.

She probably thought I was nuts but she said okay, then stood back and grinned a smile that I can state categorically was good for my health.

That is what I call winsome.