#11. Thou Shalt Not Take Thy Son's Name in Vain

Some days, I think God called his only son Jesus Christ because every once in a while, depending on the circumstances, that’s the first name that springs to my mind when I see what my only son Michel has gotten up to.

I left the house at about half past seven and started walking to where my white 2011 Chevy Malibu (I call it Barbie—Malibu Barbie, get it?) was parked.

It was raining a bit


I glanced up and noticed a tall, slender young-ish man wearing a frontwards facing baseball cap, jeans and basketball jersey coming my direction. And he wasn’t walking, like, happily. Sometimes you can just tell.

Just 30 minutes earlier, I had said “have a good day” to and watched my son Michel leave the house for his new job. A gig, he says, he really likes and one that holds lots of promise. And he was wearing jeans, a baseball cap and a summery shirt.

It was at that moment I thought about God naming his kid.

"What now?" I thought. Was the new boss suddenly an ex-boss?

Turns out quite a few guys fit Michel’s description.  And I really savored the rush of relief that came with knowing it wasn’t him.


I’m also dead certain there’s a direct link between that medium-grade euphoria and what happened next.

As the stranger and I got closer, it became clear he wasn’t alone.  I saw another individual—a woman—crossing towards him from the other side of the street. They met at a Ford SUV parked directly in front of my Malibu and when I was about four cement sidewalk squares away, he got into the passenger door; she climbed into the driver’s seat.

Like I said, it was raining a bit. I could tell by their facial expressions and gaits neither he nor she was very pleased with the world.

And then, just as I reached the front right fender of my Malibu, I saw the SUV’s reversing lights go on and watched as the SUV backed right into my Chev. And not just like touch it.

“Crunch” is exactly what one of the vehicles said. My car actually moved backwards a hair.

The Ford pulled up. The driver started out almost in tears and began apologizing. I put my hand on her right shoulder and I think surprised her with, “Don’t worry about it. That’s what bumpers are for. Have a good day.”

I thought, "It's only a car for heaven's sake." 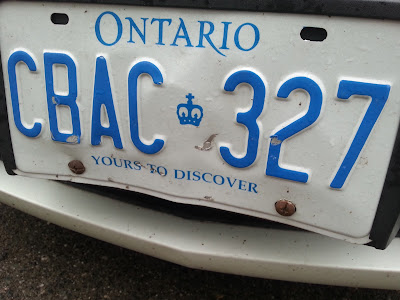 And feeling very pleased with myself, I drove away. "Why make that pair's day worse than it already was?" I asked myself. "Because that's the kind of nice guy you are, Pete," I answered.

"Indeed" I said to me, "the best place for me to park this vehicle will be on --wait for it-- moral high ground."

Except I can't. Instead, I parked on the street, went around to inspect Barbie's front end, saw this plate and immediately remembered what God named his son.
Posted by EditorPete at 8:59 AM