Oh write your own damn headline with "scoop" in it. I'm too pooped. 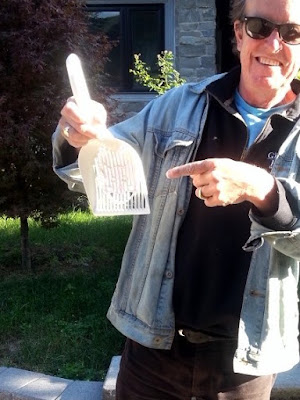 There's a pet-supply store on my block called the Kennel Cafe and when I entered an hour ago, without a hi-how-are-you,  I told the clerk I needed a new kitty-litter scoop and he pointed me to a door, saying, "through that door on the left--all the kitty-litter supplies."

Sign number two: There were at least eight different kinds of kitty-litter scoops on offer.

Three: I didn't just grab the one handiest to me; I actually compared the various kitty-litter scoops and hung the first one I picked up back on the display wall. It was a pretty blue and all but as soon as I had it in hand I realized it was a bit big and might not be perfect for getting at the lumps in the corners of the kitty littler box.

Four: I chose a smaller one that actually has a little kitty's face extruded into the scoopy part.

But it wasn't the cat-shaped grate that sold me. And neither did the fact that the label promised:   "CLEANS IN SECONDS!" 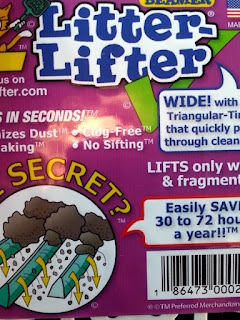 "WIDE! with more Triangular-Tines that quickly power through clean litter." (I ask myself, "Who writes this stuff? And then I answer myself, "Me, if asked!")

This next part was the clincher:

I took my new scoop over to the clerk and said, rather exclaimed, "this scoop is going to save me 30 to 72 hours a year!!"

I continued: "If I thought I spent more than 30 hours a year cleaning cat litter, I'm not sure it's worth going on any longer."

And added; "That's a pretty big gap. Between 30 and 72 hours! How do you suppose they measured? Do you think they monitored people?"

Me: "I have a few Carleton University credits I earned with less time invested than that." 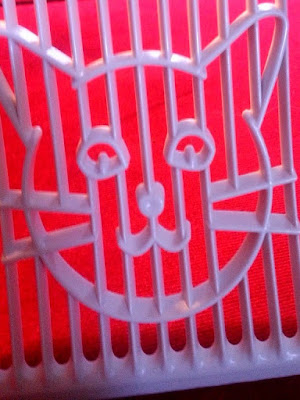 I bought it anyway. And as I walked home, a little discouraged at the thought that I might actually use, like 40 hours a year scooping up after our cats Kiwi and Iris who don't really contribute that much to my otherwise busy life, I stopped an off-duty security guard and asked her to take that lovely photo of me and my new scoop.

I asked her if she thought 40 hours on litter duty was a lot.

"You might," she said,  "be surprised, if you actually counted."

I'm not going to.

I will, however, heed the advice on the label and follow the scoop-manufacturing company--BEAMER--on Facebook and--with more enthusiasm--Twitter.

Under normal circumstances I'd take the opportunity to make some sort of joke about litter on twitter but it's been a long week and I'm a busy guy.

I don't have time to waste on crap like that.

Posted by EditorPete at 3:42 PM