5 Great Moments From A 5-Great-Lakes Odyssey 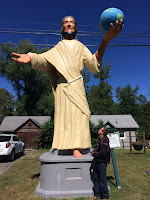 My daughter Ev and I arrived home tired and happy yesterday after a five-day bike trip during which we visited much of the state of Michigan and saw all five Great Lakes: Huron, Ontario, Michigan, Erie and Superior. I'd love to write a long story about why this was the best vacation a father could have, but that would only make people jealous. Heck, sometimes the stuff I get to do makes me jealous.

So instead, here're five highlights. (I may have to blog more on this adventure later.) 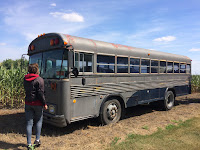 Highlight One. It was Ev who suggested we pull over to get a look at the giant Jesus at the Dinosaur Gardens Prehistoric Zoo, just outside Ossineke, Michigan. A little plaque near His Left Foot tells us that the founders of the park were devout Christians who saw no contradiction between dinosaurs and their view of creation. They just reckoned the "seven days" of creation that the bible goes on about is taken way too literally. My mom would have loved this place. 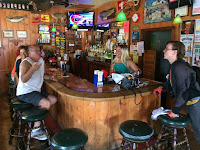 Highlight Two. The 1988 diesel-powered Bluebird bus sat alone and a bit sad in a field just east of Bay City, Michigan. Ev stopped and said, "Dad I know you love buses. We better go see it." Of course I'm glad we did and we learned it could be ours for a measly U.S.$3,200. My father--who with his brother Ed owned a fleet of buses when I was young--would have liked this bus as much as my mom would have liked the statue.

Highlight Three. Day two or three--I forget--we were looking for lunch and Ev noticed this homey place: The Big Ugly Fish Tavern. Upon entry, we were immediately told : a) There's no food  and, b) it's the best dive bar in Saginaw. "Google it!" the guy at the bar said. We did.  It is. Just like I said about my mom and the Jesus statue, every Carter I've ever met would have liked The Big Ugly Fish. In fact a few of the folks we saw in there looked like cousins. 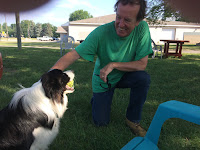 Highlight Four. Jack the Dog we met at the Lakeshore Motel just north of Port Huron. The Lakeshore's owner Val  told me she recently adopted Jack after her sister's ex (who had been serving in Belgium) got re-assigned so had to find a new home for the pup. Jack comes from a long line of award-winning Belgian Border Collies, and Val said, "I can just imagine how proud his mom and dad are, knowing that their well-bred son has moved to America and is living up in Northern Michigan in a no-tell motel." 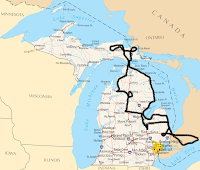 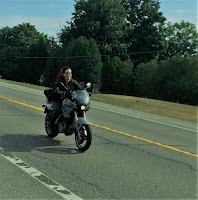 Highlight Five. See that map? It's a close approximation of our route. (I produced it myself, using my computer software skills.) See how the road goes a bit screwy in some places? That's because for pretty much the whole trip, Ev and I kept changing our destinations and our plans. My favourite switcheroo came on day four, after we made it to the very top of the state, headed for the Canadian border, which meant we'd loop  across the north side of Lake Huron, past Elliot Lake, Manitoulin, Sudbury and all those parts of the world we're so familiar with. Minutes before we arrived at the border, Ev and I made a U-ee and headed south instead, to explore a few more places we'd never been before.

Highlight Five, eh.  Michigan is a helmet-optional state. Because we're conscientious and mature, 99.9% of the time Ev and I kept our helmets in place and securely fastened. But when I decided I'd like this blog to contain at least one photo of us actually riding, turns out  my camera was trained on Ev only during that teensy weensy remaining 0.1%. What can I say?  All's well that ends.
Posted by EditorPete at 6:30 PM