To Aries is human

When I was a little boy, probably under 10, a version of the following conversation happened in the house we grew up in, sometime in late winter or early spring of whatever year it was.

My mom: “Peter Frances Carter when your birthday comes around in September we’ll have the biggest party ever.”

Knowing Huena (that’s my mom’s name) she followed that with an improvised ceremony of adoration that might start with a song, in fact, this exact one:

Looking back, I find it hard to believe that there is not one single syllable of exaggeration in any of the preceding story. My mom piled on the praise as if it were -- here’s something not a lot of people know -- as if it were free!

Somewhere between being born in Port Hood Nova Scotia, and moving to Sudbury and giving birth to two kids for every decade of the rosary, Huena learned that compliments and reaffirmations can be doled out in dollops.

All that love can be educational, too.

One of the reasons all my brothers and sisters and I knew how much a “peck” is was because my mom used to sing:

Huena sang that song so often that when I went to write out the words just now they were right at my fingertips. (I have a good friend named Larry Till who very recently revealed that he, too, knew how much a peck was early on because his grandma used to sing the same song to him. And get this:  Larry’s one of the really swell guys on the planet--he’s generous, funny, a heck of a writer... I believe I’ve stumbled on to something here.)

But back to little boy me.

Tom: “Peter. My birthday’s in May. Tell you what. You can have it. I don’t need it any more. Then you won’t have to wait ’til September.”

Tom gave me his early-in-the-year birthday so I wouldn’t have to wait for ages. I’ll never forget that generous move. Tom was full of them. 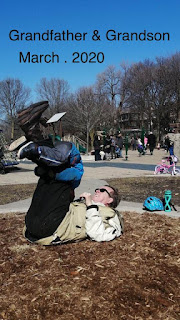 So why am I telling you this now?

Because the time has come for me to pay it forward.

April 6 happens to be the birthday of some of my favourite people: My sister Charlene, my pal Willa Oaks, author, raconteur Ernest Hillen and last but most, Mateus Remy Carter Chaignet, my son Michel’s about-to-be-four year old embodiment of perfection.

But  you may have noticed that the whole world is not in birthday-party mode. All these early-in-the-year birthday celebrants are getting ripped off. (From my observation, everybody I know who was born on April 6 loves parties!)

So, in honour of my brother Tom who died earlier this year, I am handing my September 28 birthday over to the youngest of that bunch of party-loving Aries’.

Me: “Mateus Remy Carter Chaignet, when your birthday comes around in September we’ll have the biggest party ever!”

Posted by EditorPete at 8:19 AM