Woman pushing a child in a stroller past my house an hour ago, to the kid: “What colour is that car?”

I’m not sure how old that child was, but being in a stroller gives you some indication. What I am certain of is that the mom was not a Carter mother.

I know because I had one. Her name was Huena.

Back to my mom. Huena’s kids (or grandkids) could neither say nor do anything wrong.

I have no idea what that did to us — developmentally speaking — and I don’t care. The point is, she saw her family as we were: As flawless as the Virgin Mary.

Even when it appeared otherwise, Huena held tight to her beliefs.

If a Carter (or by extension, MacIsaac, mom’s maiden name so it included nephews and nieces and whoever else she said) got caught say, knocking on people’s doors and running away (nicky nicky nine doors we called it), and the p-o’d homeowner called our house, Huena accused the curmudgeonly neighbour of not having enough to worry about.

Or say, for instance, one of us had a scrape with the law.

She knew immediately that the cop who showed up at the house (while the family was on our knees saying  the rosary if you can imagine), the judge, maybe even the lawyer my dad paid and who was until that moment a family friend and fellow parishioner at our church, were crooks, the lot of them.

Not that it ever happened.

Huena's kids, nephews, nieces and the rest of her extended family, were incapable of sinning.

In Huenaville trouble arrived in one of two guises: Bad company and envy.

If one hers got in trouble, it was because he or she fell in with bad company.

And if somebody bullied us, they did it because they were jealous. 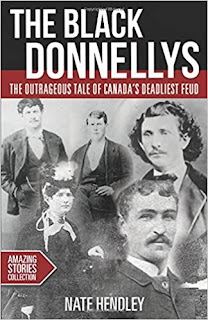 I remember a big kid named Gary teased me once when I said I was going home from school because I was feeling sick and he said, “Aww poor Carter. I bet your daddy’s going to bring you ginger ale and ice cream.” (My father Tom knew Canada Dry Ginger Ale cured everything. And I have no clue how Gary had that intel, but never mind that.)

I told Huena about Gary and she said: “He’s just jealous.”

Scientific fact that my kids know: Mean people who pick on you do so because they’re jealous.

Don’t get me wrong. I don’t think my mom was perfect. You might be surprised to know Huena lied quite a bit. Especially at supper time.

Exhibit a: My chest. Nothing I ate put hair on it.

Other than that, Huena was as flawless as her kids.

My next blog? Why I’ve always sided with The Black Donnellys.

Posted by EditorPete at 6:09 PM