Correct me if I’m wrong but I think that when I was a kid, a regular-sized empty pop bottle was worth two cents.

I’m fairly sure the larger, so-called family-sized bottles got five, but it might have been 10 cents. Those tiny six-ounce Coke bottles were two cents, too.  But we mostly returned the standard 10-ounce-sized bottles.

Here’s why it was such a thing: Not only did my dad let us retrieve and cash in empty pop bottles from the lunchroom at the bus garage he owned and where 20 or so guys worked every day,  but my parents had no objection to buying lots of pop for our house. I’m pretty sure mom and dad, namely  Huena and Tom, knew life was better if you didn’t force kids to eat and drink stuff they didn’t like.

I am completely, as my daughter Ria would say, down with this.

Honestly. Do you know any adult in the world who is, like, I don’t know, unfit for life or something because their parents let them have too much sweets?

On that topic, I watched Bruce Springsteen’s  Live On Broadway the other day and at one point, he talks about eating Sugar Pops for breakfast and looks at the camera and asserts that there was only one problem with Sugar Pops: Not enough sugar.

You had to pour more on.  Like we used to.

You’d enjoy Springsteen Live On Broadway. The Boss talks about his childhood consisting of an endless cycle of family, school and church.  Family, school and church. He speaks  very lovingly about growing up “surrounded by God!”  “Surrounded by God ... and my relatives.” If you weren’t a Springsteen fan before, you probably would be after seeing his Broadway show. I’m also certain he’ll be thrilled to learn Pete’s Blog and Grille gave his Broadway show a glowing review.) 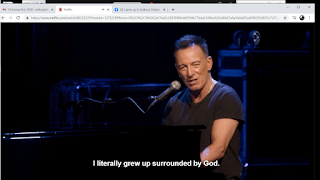 I’ve digressed so far I forgot what I was writing about.

Summed up in seven words, here is how pop bottles worked on the open market.

Six pop bottles equalled one comic book. Five got you a chocolate bar.

Pop bottles was the Bitcoin of the 1960s.

And like Bitcoin, some stores made trading in pop bottles easy; others not so much.

When I was 10, if pop bottles was your currency of choice, the variety store one city block east and half a city block south of our house, Pellis News, or Pellis’s, was the place you wanted to do business.

Other enterprises, such as the store half a block south and a half block west of our house — I could name names but won’t — were nowhere near so bottle friendly. They quote unquote accepted the bottles but they didn’t make you feel welcome.

At that enterprise, we could use empties to buy something, but no way would they just trade actual cash for the bottles.

Worse yet, at another operation, a few blocks south, the stated policy was “if you didn’t buy the pop here, you couldn’t return the empties.”

But at Pellis’s?  Empties were a good as money. Pellis people trusted kids.

We sometimes hauled the bottles in through the back door, then strode to the front counter and informed  whoever was working how many we had, and our word was gold. If we said he had 12 regular bottles and two big ones the clerk would calculate how much we’d delivered and—get this—if we asked, they’d actually fork over the cash equivalent.

Pellis’s treated us with respect.

I just thought of something. Once or twice or three times in my childhood, I tried, lamely, to shoplift.  To use, as we used to say, the five-finger discount. It never once occurred to me to swipe anything from Pellis’s.  Any more than I’d swear in church.

And also, now, all these years later, every single time I return empty beer bottles to the beer store — and it’s happened a time or two — I  think of Pellis’s.

I love that store.