How I stopped worrying and learned to love the bomb shelters

Until yesterday, I had never laid eyes on what has to be one of Ottawa, Ontario's, must-see tourist attractions. A visit to Canada's capital that doesn't include this site rivals Rome without the Vatican. Nashville but no Opry.

It's a four-storeys deep underground nuclear bomb shelter conceived in the late 1950s (just like me) then operated as an actual military installation until the Department of National Defence decommissioned it in--get this--1994! The thing has been a museum since 1998.

On the fun/educational/weird scale, the Diefenbunker rates 11.5 outta 10. If you're a boomer, you'll be inhaling the forced reminiscence and memories. (Black ashtrays beside every black dial phone do it for me.) Several of the rooms will remind you of the best scenes from Dr. Strangelove like the one where President Mervin Muffley, played by Peter Sellers, says "Gentlemen. You can't fight in here. It's the war room!"

Younger visitors to the Diefenbunker'll come away with even more material to make fun of boomers with.

That's all the details you're going to get here. If you're looking for like, you know, facts, go here.

Meantime, here's how I learned to love the fallout shelter.

For some reason, I feel connected to John Diefenbaker. Maybe it's because he was prime minister the year I was born. I know all the words to the old Stringband song Dief will Be The Chief. He's the one who thought this thing up, back at a time when lots of people thought communists would commence bombing any second. The Diefenbunker, Dief figured, would provide shelter for 400 officials and soldiers (including the governor general, thank goodness) for up to 30 days after the big one hit. But whoever turned the place into a tourist attraction went to great trouble to include other people's perspectives. During our tour I noticed one of the wall displays showed lyrics to a 1950s anti-bomb-shelter song that I've reposted in the photo at the end of this blog, so you, too, can sing them yourself, to the tune of Sweet Betsy From Pike. I don't mean to brag but my wife Helena and I are now a two-fallout-shelter couple. In 2017, she and I spent a few hours with the colossally eccentric Bruce Beach. Beach buried 42 full-size school buses under a hill near his home near Shelburne Ontario and thus created a shelter big enough for 500 people, complete with children's bunks, dentist office, a giant septic tank and tiny jail. (I was profiling Beach for CPA Magazine, and on a September afternoon a few weeks after our visit, he called me to ask when the story would be appearing. Me: "November, I think." Him: "Oh dear. I hope there's somebody around to read it.")
Back to the Diefenbunker. It's situated in a village called Carp, Ontario, a few kilometres from the tiny community of Huntley, where my dad, Tom, grew up. Construction of the Diefenbaker was a massive job maker so I couldn't help wonder if I was looking at any old cousins or uncles in the vintage b&w photos of the bunker under construction. Probably the guys in the pic with the sign that warns "Do Not Urinate Inside Structure! Penalty dismissal."

Another thing about my father? In all the years he drove us from Sudbury to Ottawa--and then all around the Ottawa Valley from the Carter homestead to uncles' farms then to old cousins' gravesites, down little winding dirt roads that all looked all looked the same and through villages with no street name signs--Tom never: a) glanced at a roadmap or b) stopped to ask directions. Tom had a bloodhound's sense for following the right path.
In painfully marked contrast, here's baby boomer me heading to the Diefenbunker, trying to not look too obviously illegal, with one eye on the GPS and one on the road signs.  I'll be like, "Helena. Pretty sure this is the turn; wait, there's a road." And she'll be like, "Why don't you stop and ask somebody?" It's never pretty.
Now that I think of it I wonder if Tom was lost too but just didn't let on.
God knows he would have gotten away with it. My mom was always too busy with us kids and we  were never in a hurry to arrive at an aging aunt's house.
Maybe my dad just drove around and around until he eventually found where we were headed but just kept his mouth shut.
That sure would have minimized intra-auto-conflict.
I think I just learned something really important about wartime strategy.
I told you the Diefenbunker was educational.

One more thing. Speaking of directions, I should add that if the big one ever does get dropped, I know the quickest route to at least two bomb shelters. So stay in touch. It could save your life.

(And here's the lyrics to that song I mentioned.) 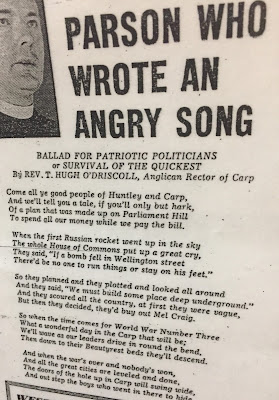 Posted by EditorPete at 5:54 AM