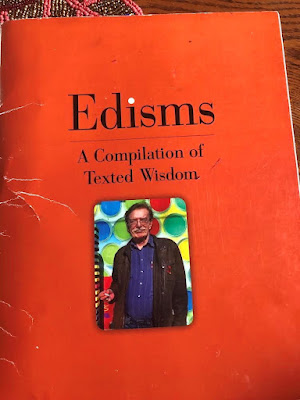 My big brother Ed died Feb. 1 and I miss texting him because the following is the kind of thing that happened a lot.

A few years back I was in my seat on a plane heading for Vancouver from Toronto and we were still on the Toronto tarmac. I looked around at the other passengers and texted Ed: "Not only is there a school hockey team on board, there's a guy with an acoustic guitar and a nun.Wearing the old fashioned nun habit! This flight's going down for sure."

My text had barely left my phone when I got his response. Ed was that fast.

When I read what he wrote I laughed out loud and the man sitting beside me asked what was so funny.

His response when I reported what Ed had written? "I'd love to meet a guy whose brain works like that."

But before I share with you what Eddie texted me , with not even two seconds elapsing between his getting my message and responding, I must tell you about a book that came out a few years ago, titled Edisms. 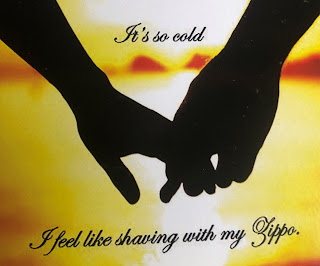 Edisms was a vividly illustrated and perfectly bound collection of texts that Ed had sent my daughters Ewa and Ria.

They, with the help of my friend and graphic artist Tim Norton, made the random assortment of ridiculous texts  (e.g., "In Honour of Your Success, I have opened the Holy Can of Beer. And Poured" and "Is your Mexican hairless or did you shave him yourself?") look downright poetic.

I figure some day a future archeologist will find a copy of  Edisms in a cobweb-covered abandoned tavern and it'll become a legendary mysterious text, widely quoted and maybe even made into posters. Like Khalil Gibran's "The Prophet" (Ed of course would at this point be like, "I preferred The Profit, by Khelog Albran."

That reminds me. Who here is old enough to remember that "You are a child of the universe; no less than the trees and the stars you have a right to be here" poster allegedly unearthed in some church in Boston or some such? It was called Desiderata. All the hipsters had posters of it and it actually became a hit song. Cue Ed: "I liked the National Lampoon's version better. Deteriorata starts off  'You are a fluke of the universe, you have no right to be here.'"That, Mr. Seat Mate, is how Ed's brain worked.
All.
The.
Time.
And no better evidence of it is there than Edisms, which Ewa and Ria and Tim produced in honour of Ed's 60th birthday, seven years and three days ago. A memorable party was held.

And yes, I do believe that someday Edisms might be scripture.

Which brings us back to to my plane ride and the nuns. Ed's response to my doomsday message?

This: "At least when you crash you'll go out with a bang AND a wimple." (See artist's rendering above.)

He had "wimple" right there at the forefront of his noggin where other people have real estate prices and interest rates; wimple had been sitting there, on deck, for years, waiting for me to deliver that straight line.

I still have a bunch of texts from Ed on my phone and they'll be there as long as I own the thing.