Over lunch this afternoon, my long-time excellent friend Trevor MacIntyre and I discussed the fact that we’re both pushovers for panhandlers. So’s my wife Helena. She is quite unable to pass somebody with his or her hand out without looking him or her in the eye, talking a bit, probably patting a hand or two and ponying up.

So after lunch, on the drive home after the lunch that Trevor paid for, I decided I could probably write the definitive “A-to-Z Guide To Getting Money Out Of Pushovers.”

What follows are the top 10 tricks.

10) Be Entertaining. About 11 years ago, my nephew Alexander said he saw me on a TV show called Kenny Vs. Spenny.  I had no idea! Kenny and Spenny used to compete with each other in rather unorthodox competitions, like, “who can sit on a cow longest” or “who can wear a dead octopus on his head longest” or “first to be mean loses.” Alex thinks he saw me in what must have been "who can panhandle the best." When he reminded me, I recalled the incident in detail. I had been walking up Toronto’s main drag, Yonge Street, in midafternoon,when a man in his mid-20s sitting on the sidewalk says, “Hey! I betcha two dollars I can tell you where you got your shoes.” Me: “You’re on!” Him: “You got’em on your feet!” He won.

9) Hit me where I live. Two weeks ago. First warm day of the year. Two blocks from my house. A gentleman with a European accent holding a beer can in his right hand, his left outstretched, caught up and walked beside me a few steps. “Can you help?” he asked. “I shoulda  known better. I only had enough money for one beer and the thing is I knew if I bought it I’d really want a second but I went and bought it anyway and now I’m trying to get another." That, I could relate to. I reached in my pocket found two twenties and said, “I’m not giving you $20 but if you hang on a sec I’ll  get change.” When I told the clerk in the store why I wanted to break the bill, I kinda think she didn’t believe me. 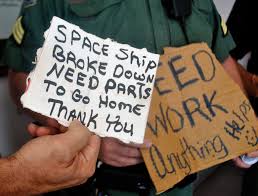 8) Hit me when I’m on the road. I think we all feel most generous when we're away from home. I’ve forked over in Havana, Shanghai, Manhattan, Moscow and most recently, Gdansk, Poland, where  I had so many gypsies trailing behind me around a big church I could have formed a dance troupe. When I was in The Lonestar State a few years back I really tried to get out to the Texas Panhandle just so I could say something funny when I got home because that’s the kind of thing that’s important to me.

7) Which is why the next tip is, “Laugh at my jokes.” There’s an intersection near my house (the corner of Parkside and Lakeshore) where the panhandlers are so predictable Helena labelled it a tollbooth. Once, a guy approached my Malibu holding a cardboard sign that read, “Homeless, broke and hungry.” I rolled down my window, handed him some cash and said, “You have to change your sign now. You’re not broke no more. Hahaha.” And he took my money and laughed too.

6)  A few weeks later, same tollbooth. This time, it’s a woman, with a similar sign. But different ending. When I got to the "not broke no more," she laughed and added, “Oh you're the guy. My husband told me about you.”

5) Location location location. Trevor recalled leaving some downtown Toronto musical theatre production one night and watching the post-show panhandlers jockey for position. “I think it was after Les Miz,” he said. “How can you not be giving them money after something like that?”

4) Trev and I not only talked about panhandling, we also discussed how we are so lucky to live in the most prosperous and most comfortable cultures in history.  We both have far more worldly goods than we ever imagined we’d have and we come from supportive and lovely families and we’re safe and happy and we've got all our hair and teeth,too. It just occurred to me it might have something to do with panhandlers because almost every transaction ends with “God bless you.” If all those blessings over years amount to a pinch of duck poop, Trevor and I should be loaded. Which we are. Do the math.

3) Which begs the question, "Does a God-bless-you after a handout have the same divine heft as a post-sneeze God-blessing?" And what if the blesser is an atheist just pretending to be a believer just to make the blessee feel better? Does it still work? 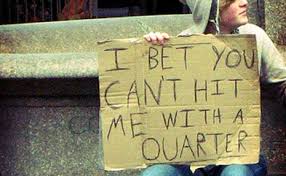 2) Speaking of working, Trev and I agreed that there’s probably no tougher job on earth. Moved and seconded: People who beg for money deserve every penny they might get; they sure work for it. Here’s Trevor on that matter: “How much would they have to pay you to actually do what they’re doing, all day long? Whatever they paid me wouldn't be nearly enough.”

1) Now that I think about it, that might be one of the reasons I’m such a pushover. Trevor and Helena are simply generous souls. But me?  At least once every waking hour I somehow remind myself that I am but  two or three bad decisions away from panhandlerhood myself.
Posted by EditorPete at 2:43 PM