Jokers can be wild but can they be trump too? 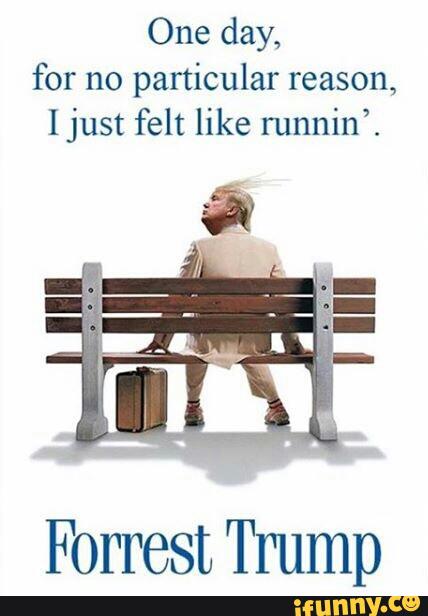 A pretty alarming notion goosestepped across my alleged mind yesterday morning. I'll explain later but first I'll tell you my way of thinking.

First of all, I love watching TV. (Which reminds me of the famous movie Being There, starring Peter Sellers, in which an extremely challenged TV addict gets elected president. I recommend it strongly but I digress.)

Second, I can’t make my mind up about anything.

I can be walking from one end of my block to the other and when I start, the first neighbour I run into will convince me that our local government’s plan for a guaranteed annual income, no strings attached, is the worst idea since unsliced bread. (Unsliced bread must be bad, right?  I don't have numbers--we'll have them later in the week--but I do know an awful lot of people agree the sliced version is the best invention of all time.)

Then, I’ll take, like 40 steps and run into another acquaintance. By the time she’s through with me, I’ll have done a complete 180 and thrown my support behind the annual-income idea.

I change my views more often than some people change their underwear. Maybe it’s because I’m a Libra. I don’t know.

Sometimes, I find myself in a position to engage freelance writers or photographers or home-repair types. Who do I turn to first? My friends. And of course I'd hire my kids. If my brother Ed's not busy, him too.

I'm so vain that last week before a visit to Paula our family's delightful dental hygienist, I clipped my nose hair.

I can do a wicked combover.

Even though I’m a self-employed freelance writer which means I can work any hours I choose, I like to goof off on weekends.

Plus, as recently as one week ago, under extremely dangerous circumstances—and I’m talking something akin to terrorism here--I used my phone as a flashlight. What happened was, I was on my way home from visiting my nephew Hugh and brother Ed at the Pilot Tavern in downtown Toronto. (The Pilot. I think's foreshadowing.) Part of my journey involved riding on what we in Toronto call streetcars; i.e., electric bus-type things that run on rails.

While I was waiting at the streetcar station, I saw the operator exit his streetcar, go over to a bin and extract a shovel full of something and with the shovel, re-enter the vehicle. I approached him and asked what he was up to. Turns out—and I’m glad I asked—streetcars carry a load of sand that the drivers can spray out onto the tracks if they need extra traction or improved braking power! Who knew?

The streetcar operator was pretty happy telling me about the sand. Then, because he still had a few minutes before departure time, he escorted me back outside the car and told me to bend down to shine my phone at a certain valve under the chassis while he re-entered the car and pushed the sand button.

So, it’s very possible that on some transit-system security camera that authorities might be examining right this moment, there’s a suspicious image taken at about 10:30 p.m. last Tuesday showing a grown man kneeling down beside a streetcar and, like, fooling with something on the public-transit system. They might have even launched an investigation for all I know. And I don't care if they have.

I also have a very pretty European spouse with strong business-sense.

Finally, I couldn’t tell you, without Google, where Yemen is.

Posted by EditorPete at 8:39 AM