I just found a bunch of really really important notions I tweeted over the past couple of years and realized I'm not using them anymore so you can have'em!
(p.s. I'm @petesbandg)

My wife of several decades says we should get a banner for the back of our car that reads "Just Married" cuz "Just" is also a synonym for "barely."

Hear about the metal band that plays the same song over and over and over cuz it's never quite good enough? They're called OC/DC.

Cops are looking for a escaped prisoner; He was doing time for bestiality. He's been on the lam for days.

If they want to find a lost peacock, they have to issue an amber, orange, blue, green, red, teal, yellow, and silver alert.

Just stood up to talk at a meeting and realized I forgot to wear pants to work today.. is that what they call Livin' The Dream?

English is amazing. Laughter and Daughter are only one consonant apart; My daughters make me dafter. With laughter.

You know your preschooler's hanging with a tough crowd if--when you say "say please,"--he's like "guilty and not guilty."

H: "Please stop by Costco to buy kitty litter & milk." M: "If we just traded our 2 cats for a cow we'd never have to go to Costco again."

What religion are most heavy-duty technicians? Diagnostic?

You never know if our main-floor toilet's going to flush well or not. It's always a crap shoot. Or should that be chute?

One hour and 45 minutes from my bed to the F97 departure lounge at Terminal One in Pearson. That was fast! And quite a Departure!

I used to be dyslexic but now I'm mornal.

My New Year's Resolution: Play more C, F, and G chords. Ask not what country can do for you but what you can do for country.

Why do priests and ministers wear colourful clothes for services?  Huge altar-egos?

"Eddie. Come in. Sit for a spell. We're playing Scrabble."

I hate having unwelcome insects in the kitchen. Time ain't fun when you're having flies.

Flu got. Difficult smart to work when. My drugs on brain.

Why do they call it fasting when it makes time slow down so?

Laziness walks in my family.

If you have a crush on your pastor do you get pulpitations?

Just realized I'm of the age when I order a club sandwich, mostly looking forward to the 4 toothpicks that come with it.

She keeps saying she's going to phone her friends but doesn't. She should join I'll call aholics Anonymous.

Damn,less than 15 hours into New Year's I already broke 2 resolutions. 1: to not drink before 6; and 2: if I do, not tell the world about it

As ye rip so shall ye sew.

: The moment the plumber says the toilet is broken and won't be working for a few hours, the back teeth start zipping up life jackets.

Off course Bernie's name was Madoff. Cuz that's what he did with other people's money.

Ria rules. My answer: "Car pool tunnel syndrome" Ria's question: "What do you get when you cross a covered bridge with commuting secretaries?"

I failed math more times than I can count.

Is saying bye-bye a tautology? 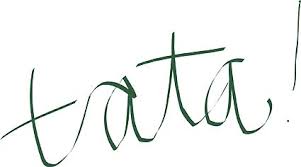 Posted by EditorPete at 3:03 PM