Featuring Chatelaine recipes for loaves, fishes and other miracles

Some years ago, I was a Senior Editor of what was — at the time — Canada’s largest and best-known women’s magazine, Chatelaine. 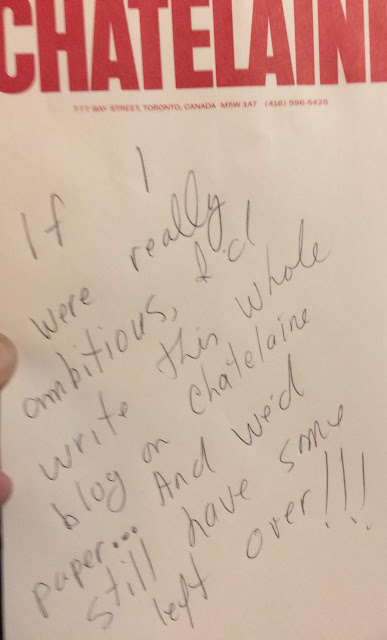 During my time there, under the leadership of editor Rona Maynard, the 91-year-old Chatelaine underwent a very expensive (million bucks, I seem to recall) and radical (stories about sex toys!) makeover.

After the redesign, not only did Chatelaine have a revitalized look and tone, so did its corporate stationery and stuff, including things like the staff’s business cards.

At some point during the process, I learned the company would be getting rid of outdated branded materials; and what caught my attention was a bunch of Chatelaine notepads.

“Tossing them,” I thought, “would be a horrible waste.”

I salvaged two boxes. Each was about the size of a two-four.

I’m not sure how many notepads the boxes contained, but I know we shared the bounty with a few of our neighbours, who had children the same age as ours.

And I might check in with one or two of them to see if they still have any Chatelaine notepads left.

Because we sure do. In fact we never seem to run out.

I just went to make a note to myself about getting our kitchen cupboards refinished and found myself writing it on a Chatelaine notepad. Twenty years in!

Our twin daughters Ev and Ria were eight; our son Michel Josef was seven and between then and now—believe it or not — notes in our house have been written.

Notes to teachers, saying why Ev, Ria or Michel had been away from school.

Notes to the same teachers explaining why Michel, Ria or Ev would be away from school at a later date.

Scribbled doodles that were immediately — upon completion of the phone call to our sister that we were on while we were doodling — crumpled up and  thrown out.

Notes magnetically adhered to the fridge door. Innumerable messages of encouragement tucked into elementary school lunches. (P.S. They took. All three of ours sailed through grade eight!)

Reminders of doctors’ appointments, including one memorable appointment when Ev and Ria were travelling to the Dominican Republic and had to visit a “tropical disease specialist” who, when the girls arrived in his office, consulted Wikipedia to see what vaccinations they needed. (Which reminds me, we took delivery of this batch of notepaper back before anybody except serious computer nerds had heard of something called Google, much less Wikipedia.)

Chatelaine notepads have served us, over the decades, miraculously.

Notes about minivan transmission repairs; notes pertaining to trips to the vet that would cost us way more money than we’d ever imagined we’d spend on a sick pet. (We once had a guinea pig diagnosed with a malignant growth and the vet suggested treatment. I was like, “It’s a guinea pig! Aren’t we SUPPOSED to do experiments on it?” I was voted down.)

Come to think of it, I’m mostly talking messages that would these days be delivered by text or Facebook—two other things that didn’t exist when we first took delivery of the notepads.

More than one ever-so-carefully crafted note to one’s spouse explaining why one wasn’t coming home immediately after work, written in the hope that it sounded like I had official work to do, when in fact it was pretty transparent that I was going to a bar with pals.

These notepads have earned their keep. (I really should ask our neighbours if they still have any similarly storied Chatelaine notepads. We could produce a reality tv show.)

Our Chatelaine notepaper shows no signs of depleting. The pads are there whenever I need one. I think  the notepads, like the tribbles in Star Trek, are mysteriously reproducing, down in our basement.

I'm thinking miracle. Like loaves and fishes. Maybe a shrine's in order.

After all, I’m talking notepads that have saved our marriage.

I’m also resigned to having Chatelaine notepads around for the rest of my days.

Indeed it has become a personal goal to hit the finish line before we run out. With luck, whoever pens my obit can do the first draft on a Chatelaine notepad.

I think I just realized another reason I like them so much.

They don’t age. The Chatelaine notepads look the very same as they did 20 years ago.  Just like me.

Posted by EditorPete at 6:05 PM