My wife Helena and I just returned from a seven-day driving trip around a small part of northeastern United States. I have neither the energy nor the stamps to send out a bunch of postcards, so here--in lieu--I present:

Postcard Number One: The hotel we stayed in our first night in Cleveland might be the scuzziest place I've ever slept and that's going some. It was 10 storeys, brown brick, and otherwise unremarkable. Across the dusty hall from our room, a party was in overdrive at suppertime. Our room was dark, musty, there was no chair and the window looked over an industrial parking lot. The real killer?

Between the bed and the bathroom door was a four-foot-by-four-foot patch of carpet that was actually--I'm warning you this part's gross-- moist! Wet. If you wanted to go to the bathroom but not get your feet wet--and who knows what the rug was wet with--you had to sort of run and leap the mooshy part. We booked two nights but stayed one. If you contact me in person I'll tell you the name but it's not a place you'd recognize. Next morning we moved to the Holiday Inn Express a mile north. The upside? From that first dive, there was only one direction this trip could take.

Postcard Number Two: And when I say up, I mean...the valet at the Holiday Inn Express told me that once a week at least, his very Catholic parents and he drive out to Amish country to a tiny crossroads called Windsor where somebody built a 50-foot statue of one of the many incarnations of Jesus’ mommy; specifically, "Our Lady of Guadeloupe." Miracles happen there, he said. Out we went. And he was right about the miracles. We witnessed two: The first? We actually decided to see the place and drove for an hour to get to it, without a map or GPS. The second? The guy who built the statue sold me a DVD so I could, when I got home,  watch the annual "Giant Statue of Our Lady in the Boonies Annual Fireworks Extravaganza." The guy's name is Ed.

Postcard Number Three: The first morning in Cleveland we headed out to the Rock&Roll Hall of Fame but stopped for coffee at a Dunkin' Donuts. Helena picked up a copy of the newspaper with the best name in the world, the Cleveland Plain Dealer and learned that that very afternoon, the Cleveland Area Paranormal Society was conducting a ghost hunt, complete with divining rods and electromagnetic field detectors, in a nearby graveyard. Admission to the tour was the same as that to the music place. $25. Rock&roll would have to wait.

Postcard Number Four: I honestly forget why we chose Baltimore as our next destination. What's in Baltimore? I mean, what else besides the National Museum of Dentistry where we learned that the average person produces six litres of saliva a day and that George Washington really didn’t have wooden teeth. Or the Baltimore Tattoo Museum where I learned that you're not allowed to take photos inside the museum proper but you can in the can? We also paid our respects at the grave of Elijah Bond, the guy who patented Ouija Boards. I really like Baltimore plus I just remembered why we went. We were going to visit a writer friend named David Kolman. And while we never actually managed to see each other--which doesn't matter between friends--I'm okay with that because David's way funnier than me and he's all I would have heard about on the drive home.

Postcard Number Five:  Now this next part's weird. When we were kids, we had several Ouija Boards around the house and for some eerie reason, I seem to recall that the one sibling who used them most effectively was my sister Norma. When Norma's fingers were on that little heart-shaped thing, it fairly leapt around the board.She also once lived in a haunted apartment in our hometown of  Sudbury.

Postcard Number Six: True story. I was in high school. Norma and my other sister Bertholde shared a two-bedroom in the middle of  town and it was freakin' haunted. I'll go into more detail in another blog but the place was written up in no less than Canada's foremost women's magazine, Chatelaine, in a story by, well, okay, me. But still. Norma's and Bertholde's ghosts were also investigated by the late ghost detective and professor  Dr. Michael Persinger who didn't believe in ghosts and who died recently.

Postcard Number Seven: And like I told the young man named Jonathan Lestat (honest!) who, with his colleague Marvin Kuzia was leading the ghost walk back in Cleveland, I guess ole Doc. Persinger sure knows now whether there's ghosts or not. Speaking of Docs, did you know that the famous gunslinger Doc Holiday was a dentist? His picture's on the wall in the museum in Baltimore.

Postcard Number Eight: Our last day on the road, we were headed north. We passed a sign advertising the upcoming Zippo Lighter Museum. I didn't say a word but then my wife of 30-odd years casually mentioned, "You want to stop there, don't you?" Turns out Norma's not the only psychic in my life. So stop there we did. And if you were to now say something like, "Geez Peter. Some of us have a life. How much more about this short strange trip of yours do you expect me to read?" I'm going to reply:  "Zippo!" 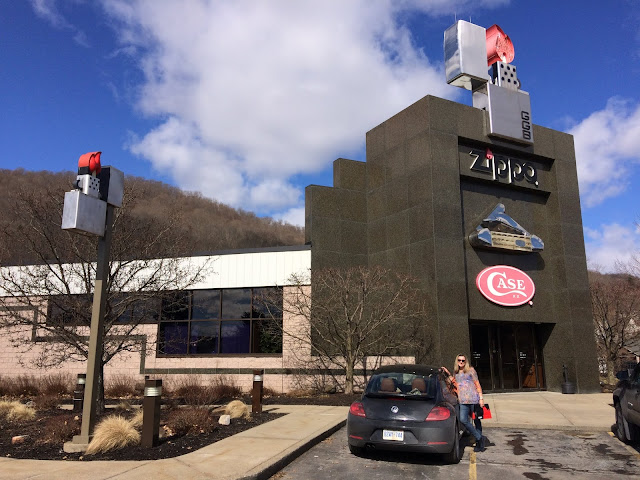